I'll admit that I'm a bit of a memory collector. Sometimes memories are attached to objects and I thought it'd be fun to share some of the memories of some items I hoard in my closet.
https://static1.squarespace.com/static/541bb7cee4b09194f7644369/t/5500e8c6e4b0d5064020e0cf/1426122971043/?format=500w
WHO: Hometown Heroes
WHERE: Urban Outfitters
HOW MUCH: Under $20
When I bought this shirt I was working at Urban Outfitters in DC (Chinatown). I had been hired to be a Women's Accessories Manager and it was my first real job after leaving MAC Cosmetics. I didn't interview for that position, I was hoping to be Women's Department Manager but it was a bigger department and they weren't sure I was ready yet. I accepted the position because it was a job that I knew I could do and I was ready for the challenge. Six months of working hard to turn the accessories department around led to my promotion of Women's Department Manager. Fast forward another 6 months, I got promoted to Assistant Store Manager. Boom. 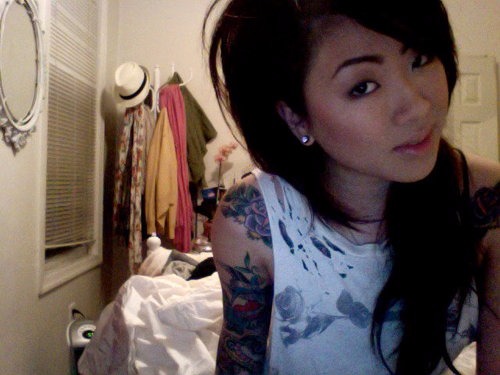 As you can tell by the original state of the shirt and what it eventually turned into, I wore it A LOT. I wore it in its original state for awhile but one day I decided to cut off the sleeves and add some holes. I did it using a pair of nail scissors. That's right, not even real scissors. Baby scissors. The holes around the neck were intentional but the little ones around the torso (accented by what I believe is a foundation spot) were caused by all the plastic shipment crates I would carry and how they'd rub against a brown belt I'd wear sometimes (this was post the "black leggings only" phase obviously).
Then The Dead Weather came on my TV and that was my introduction to Alison Mosshart.

First of all, if you haven't seen the video for "Treat Me Like Your Mother" you should and I'll link it HERE.
In the video you can see that she's wearing the same shirt and she looks like a fucking bad ass. I can't say for sure that I had a "moment" with this person who happened to be wearing the same shirt but if you were to ask me who I really started to draw fashion inspiration from, my answer would probably be her. She just has this carefree, low maintenance (but absolutely killing it) vibe. I realized it wasn't even about the way she dressed necessarily. For me, a lot of the times it's not about the perfect paring or what you're wearing. It's about how you wear it because quite frankly a lot of the time I don't even know what I'm doing. The way Mosshart carries herself makes whatever she has on - work. So maybe I did have a moment.
I spoke to a close friend recently who worked at Urban with me. Every few months we'll catch up and update each other on our lives and he said to me, "It's so crazy to be having this conversation because (in my head) you're still like 23, at the top of the stairs with a walkie talkie." and it made me laugh because it's so true! Life has changed a lot since then:

I had the privilege to attend so many wonderful shows this season and I am truly thankful for my friends, especially at Essie, for inviting me backstage to a lot of my favorite designers.

What I wore: Sunday Brunch

Today's CLOSET CONFIDENTIAL is a bit different from the last two - it doesn't have holes in it! Even though it isn't the oldest item in my closet, it still has history.

It's easy to see that there's history embedded in the fibers of these jeans. Their exact age is unclear but it's fair to assume that they're at least 15 years old and they were worn a majority of my high school experience. I even had my first ever make out sesh in these bad boys.

WHAT I WORE | WEDNESDAY

WHAT I WORE | Wednesday | heyclaire

Here are links to each piece: [Denim Jacket](http://mymarkk.it/hccdj) [Fringe…