In addition to an array of pretty baked goods topped with baubles and white “Tiffany” bows, party guests were treated to playful “Dress Up” and “Hair-do” stations – where they were given costume jewelry and the signature “Audrey” up do from the movie… tiara and all! Read on for more sparkly photos & creative details, including the sweet “Cat Adoption” station – also inspired by the movie – which was such a sweet touch… 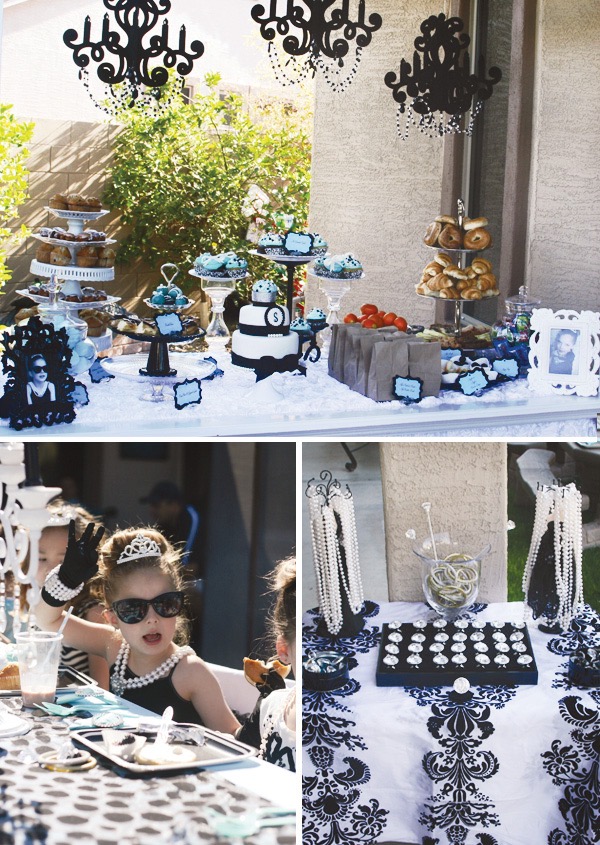 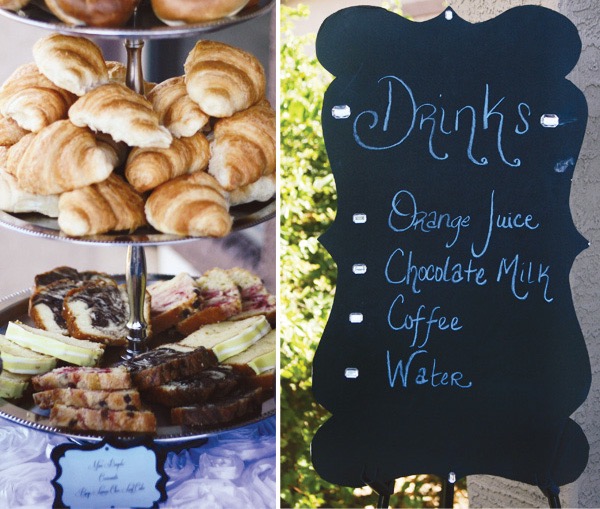 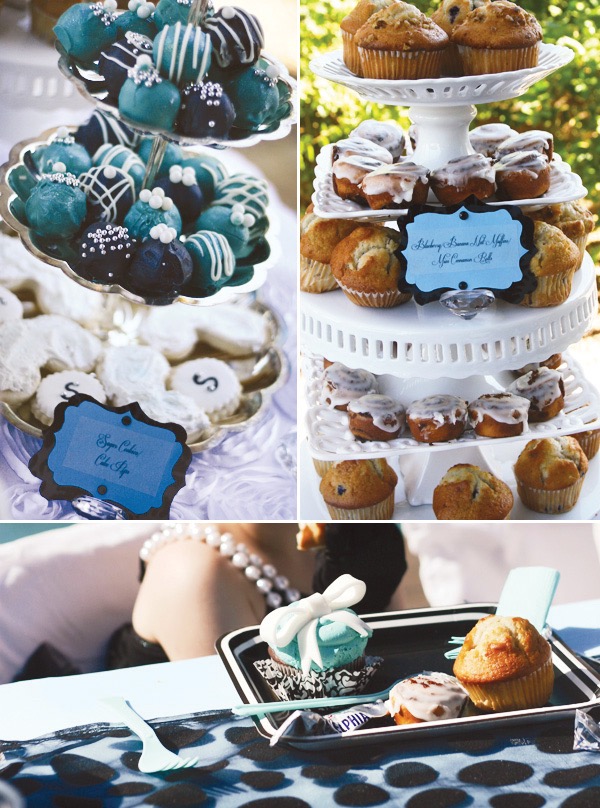 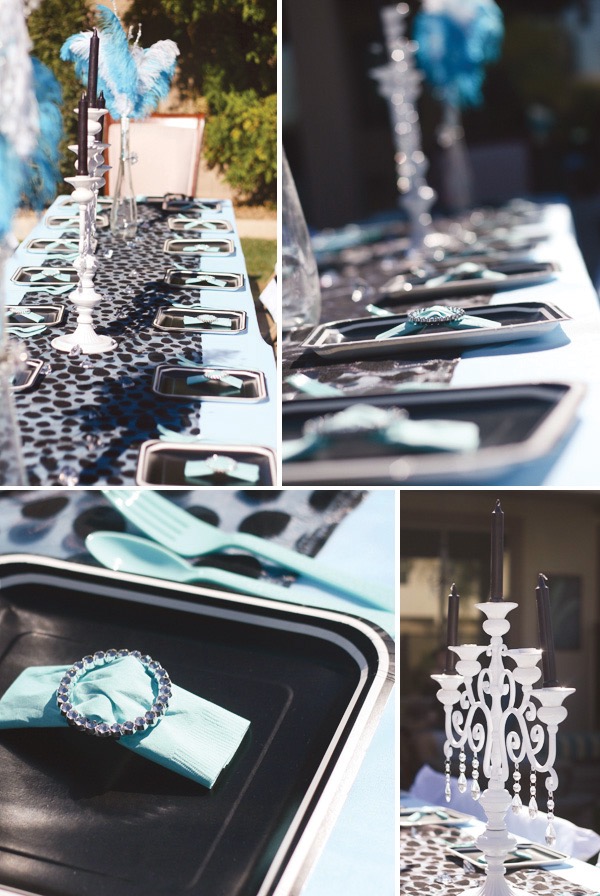 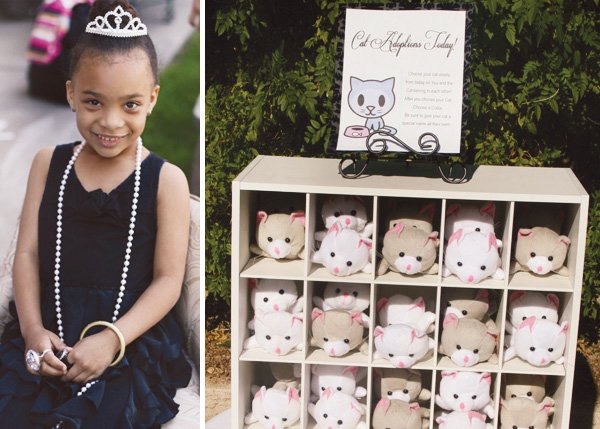 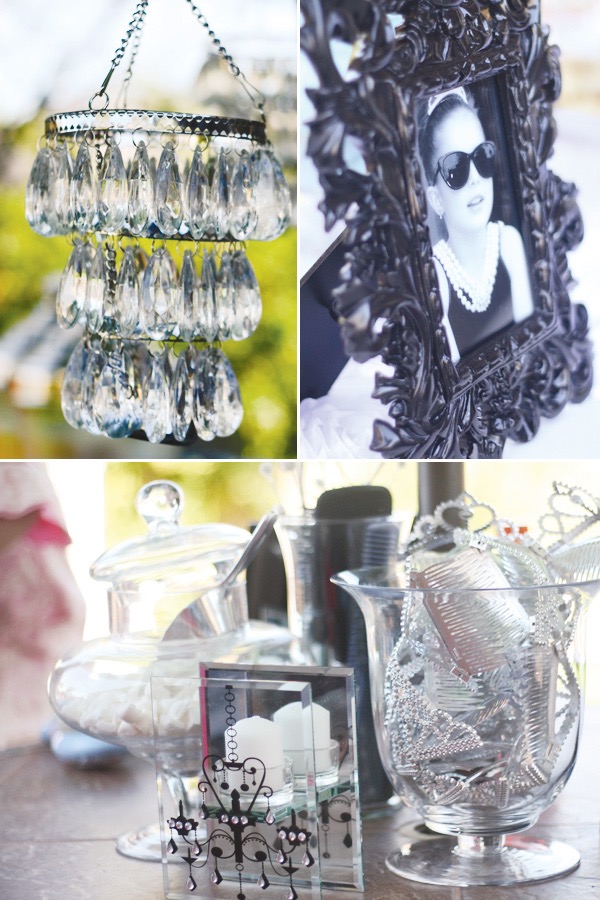 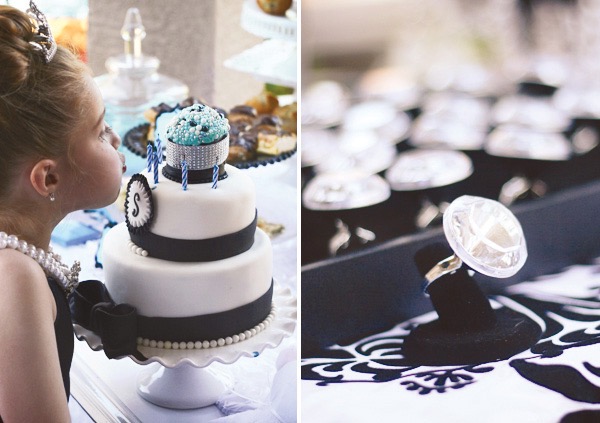 PARTY DETAILS, as told by Cristen…

For my daughter Savannah’s 6th Birthday party we went with a Breakfast at Tiffany’s theme, complete with a Audrey Hepburn inspired photo shoot for her invitations and to display at her party. The main thing I wanted was for my girly princess to have the most girly party possible. We set up a “Dress Up” table, with faux diamond rings, pearl necklaces, and bracelets. A “Hair-do” station where every girl was treated to an “Audrey” inspired up do complete with crown. The girls adopted a “cat” of their own at our Adoption Station. They chose what collar design they wanted and named their cats.

The Food/Dessert Table was centered as the main feature of the party. My vision for the table was that it would look as if you were in the scene from Breakfast at Tiffany’s where she eats her pastry peeking in the Tiffany’s window. The table was framed by a faux window frame, 3 chandeliers hung from the ceiling and gave the table some sparkle. We served all breakfast items as well as a Tiffany sparkle Birthday Cake and the Savannah Cupcake adorned with edible pearls, sparkle, and black pearls.

The Dining Table was decorated with blue tablecloth and a black polka dot runner. Tiffany Blue & White Feathers were displayed in Tall vases with a sparkle brooch around the base. The centerpiece also contained a White & Sparkle Candelabra with Black Candles. The place settings were layered with Black plates, Tiffany blue napkins, and sparkle napkin rings.

As the girls left the party dressed up in their sparkle and done up with their up do’s they were treated to “Savannah & Co.” favor bags filled with their own replica of Holly Golightly’s eye mask from Breakfast at Tiffany’s that I made using felt, trims, and faux eyelashes.