Ready to feast your eyes on something SUPER FANTASTIC?! Okay good… because this AMAZING Roy Lichtenstein-inspired “Vintage Pop Art Superhero” party that Maureen (of talented party duo Anders Ruff) designed for her son is exactly that… and super-creative in every way!

There are so many inspiring details and DIY project ideas featured here that it’s hard to pick a place to begin, so I’ll just rattle off a few to help set the scene… DIY “cityscape” backdrop on the dessert table complete with 3D skyscrapers? Check. “HERO” sandwiches served in comic book style gable boxes? Check. Squared-off candy containers dressed up with cardstock windows to resemble buildings? Check. An array of the most ridiculously cute desserts possible? Yep! 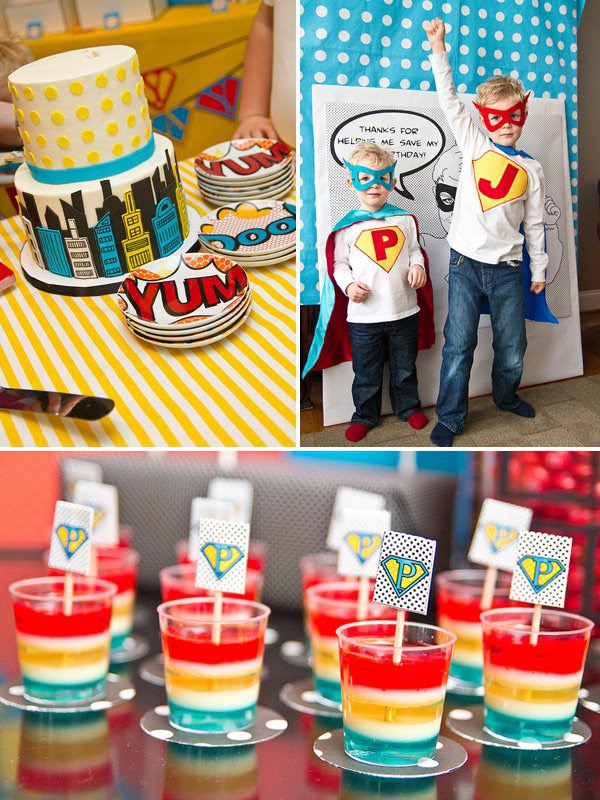 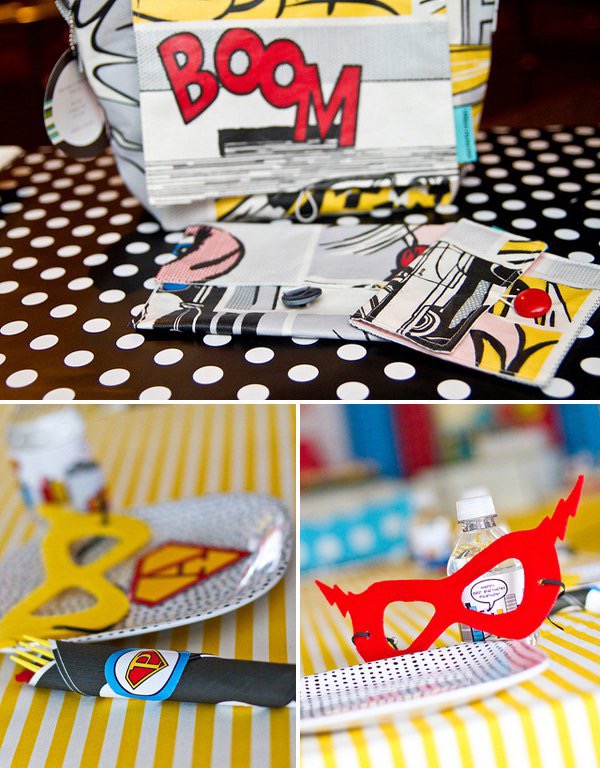 I could go on and on about the details, but as they say – “A picture is worth a thousand words.” – and I think that rings especially true for comic books! So scroll down for TONS more fun party pics (as captured by Becca Bond) + ALL the inspiring creative details, as told by Maureen… 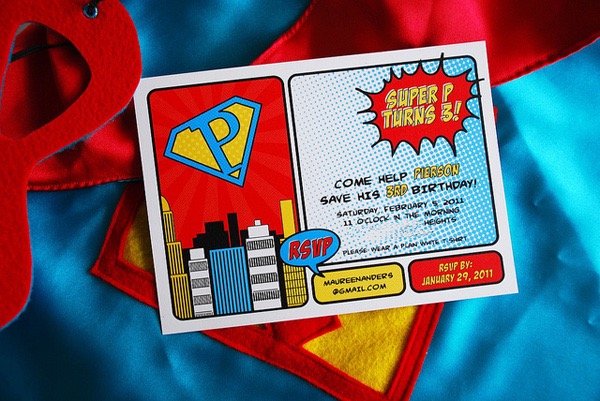 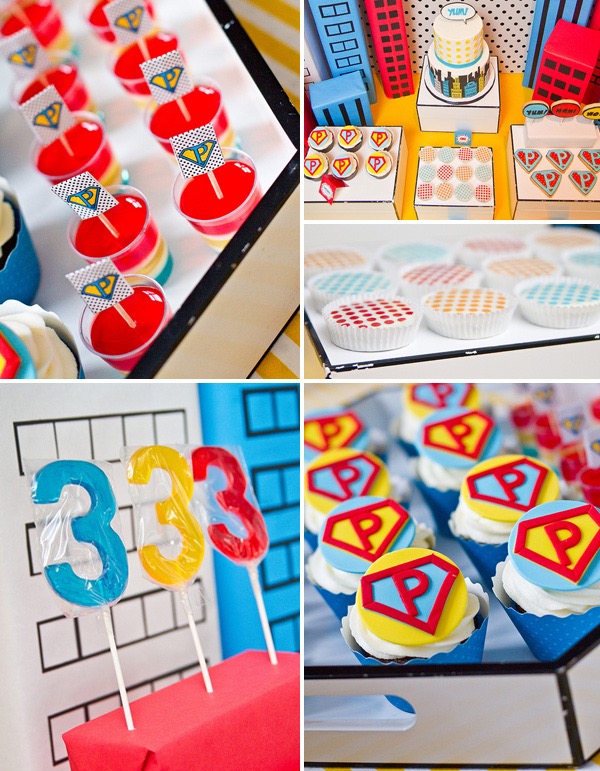 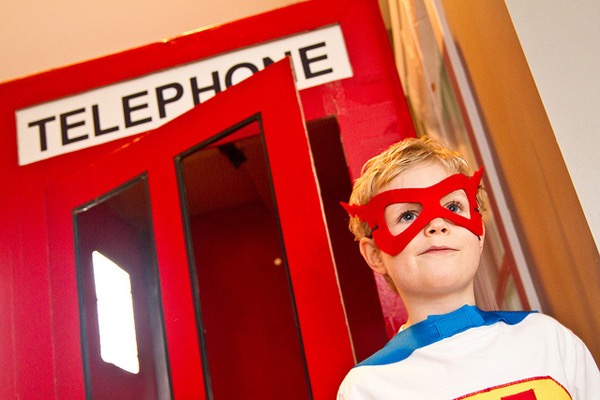 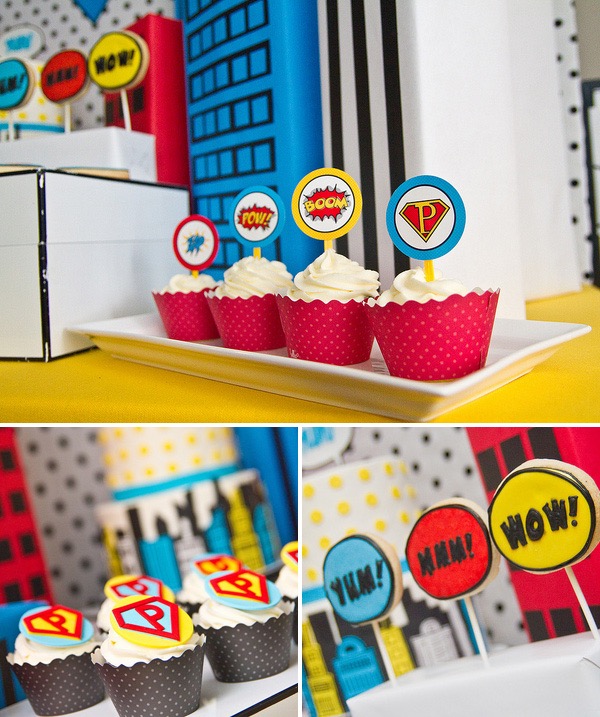 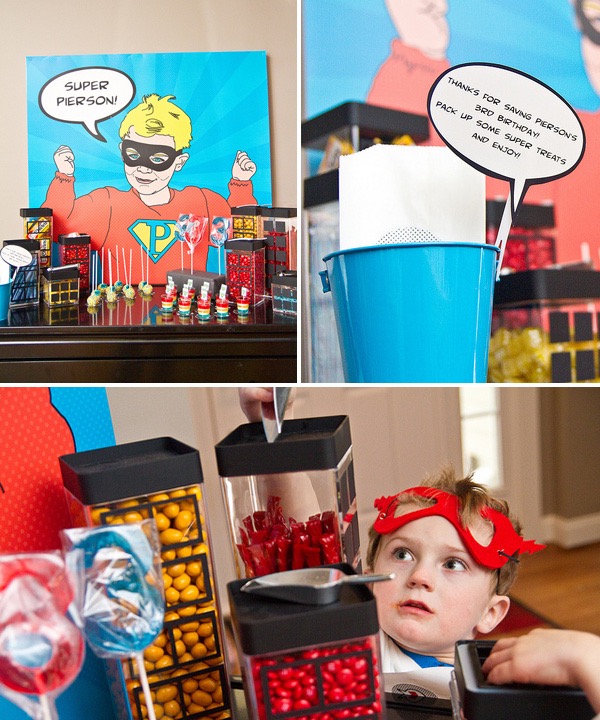 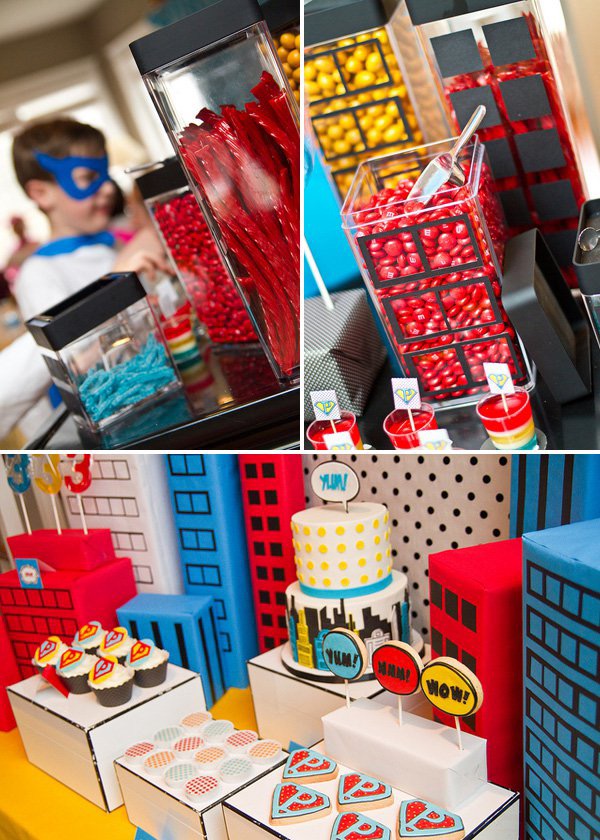 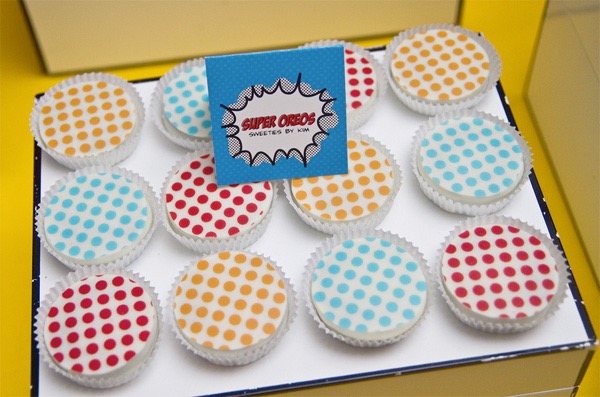 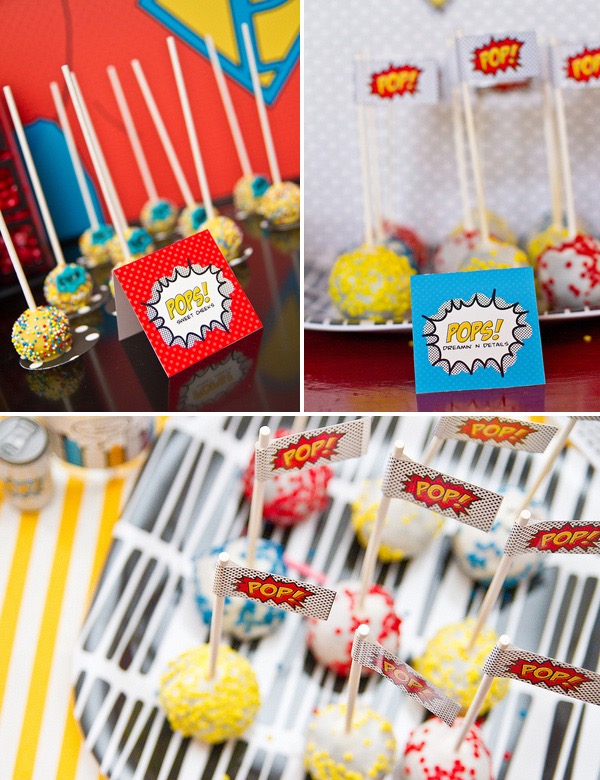 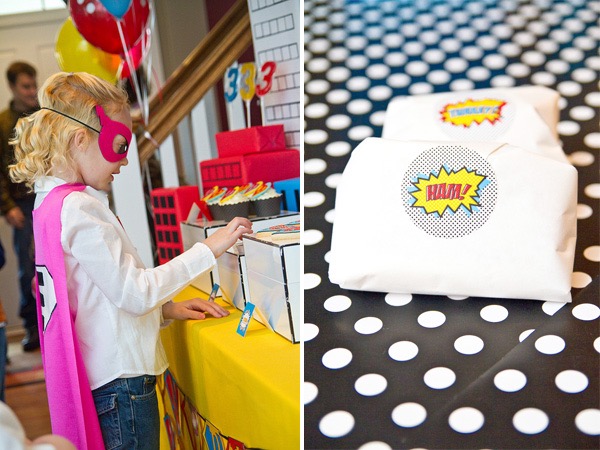 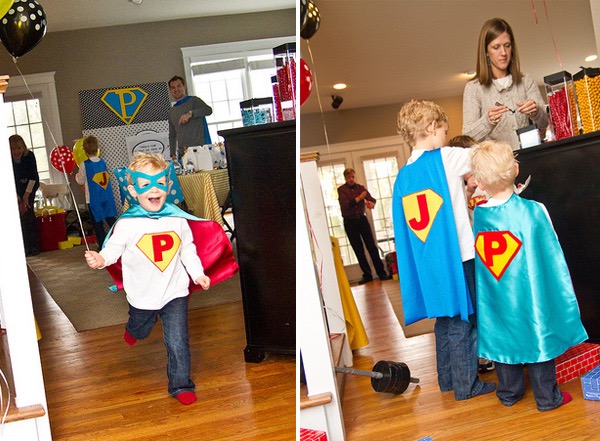 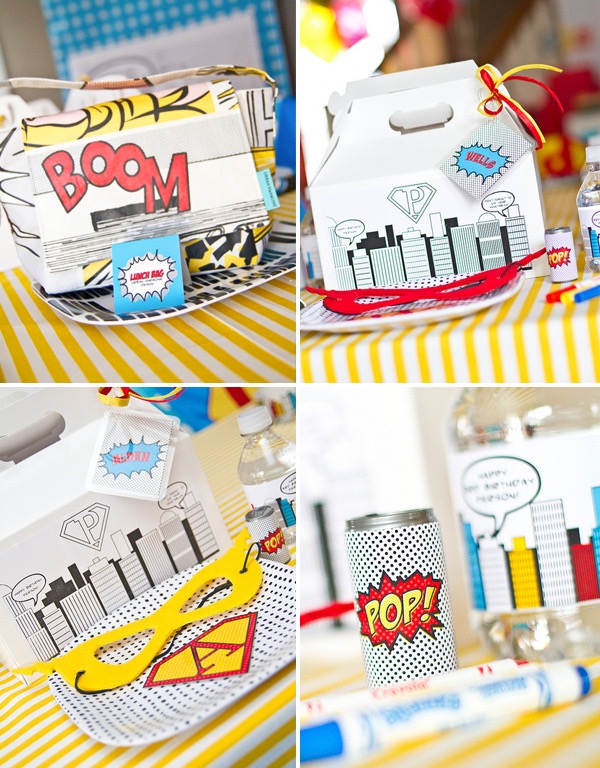 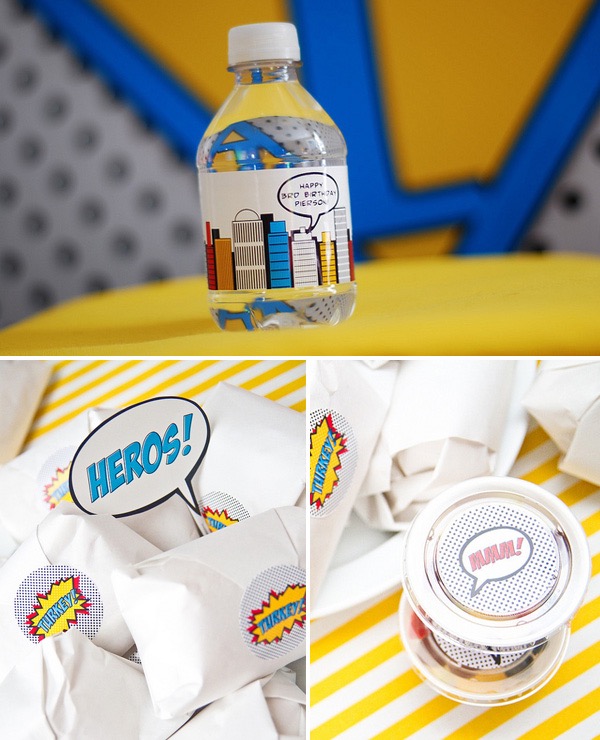 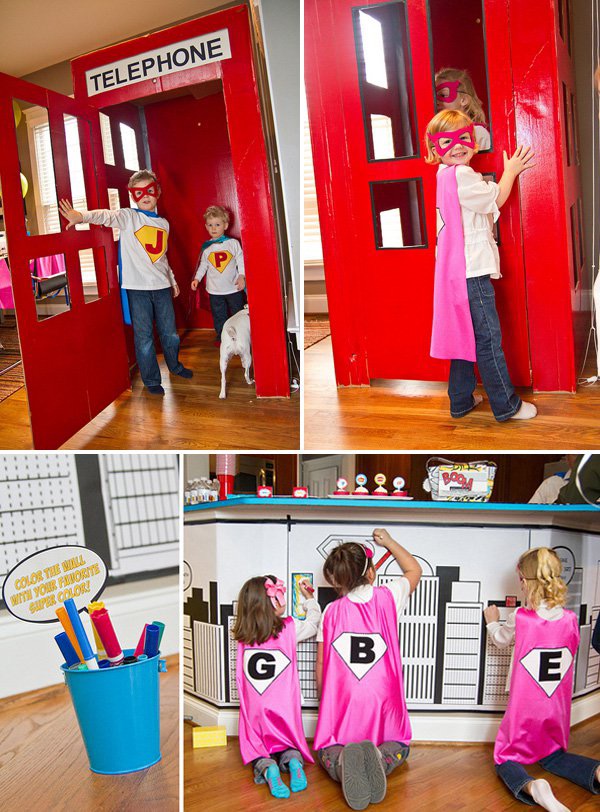 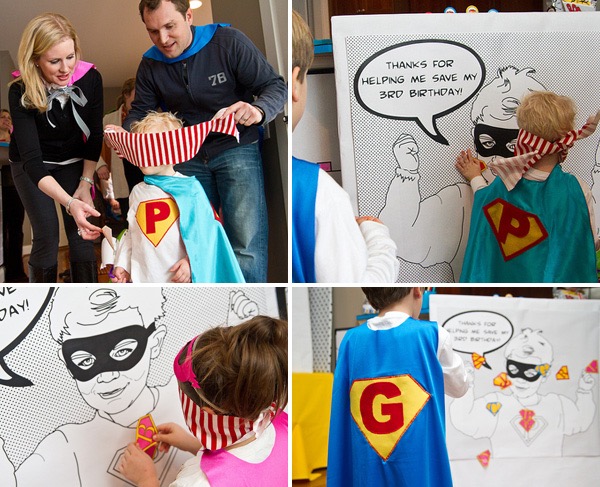 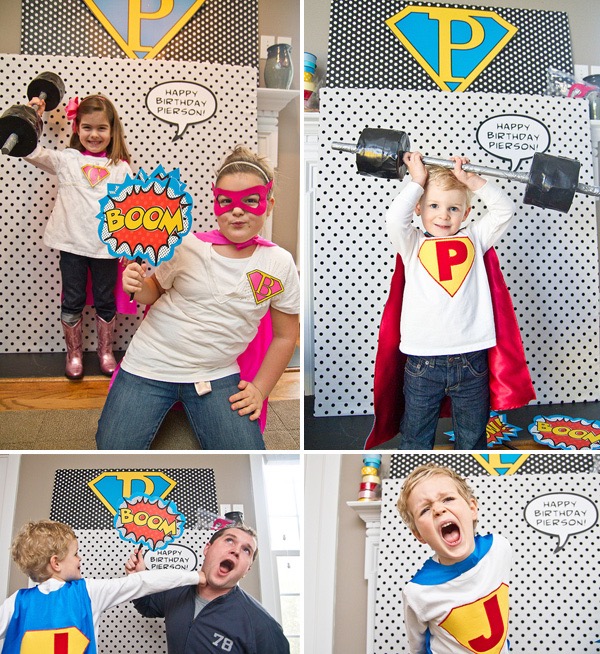 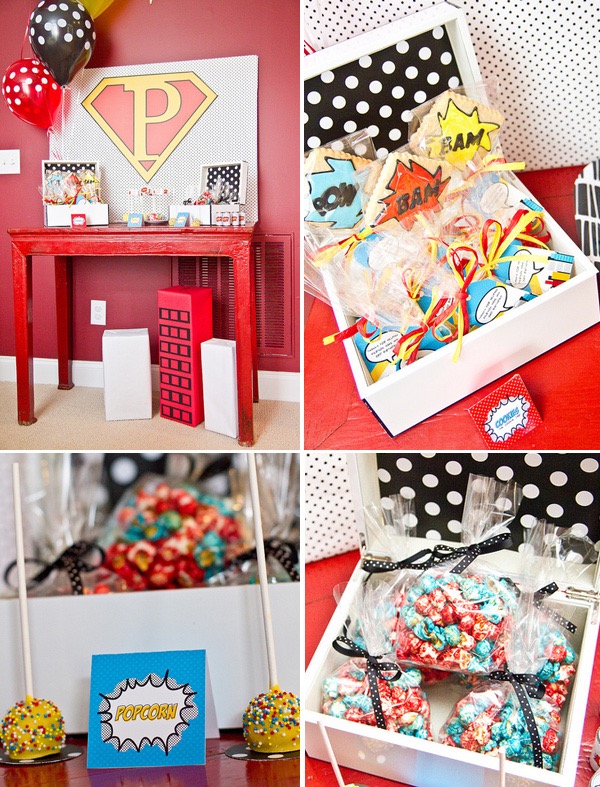 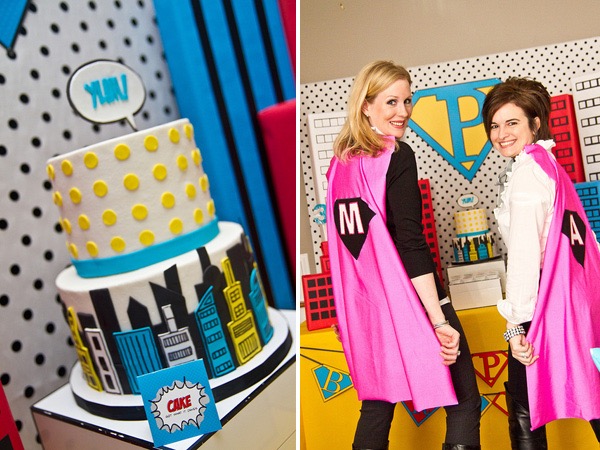 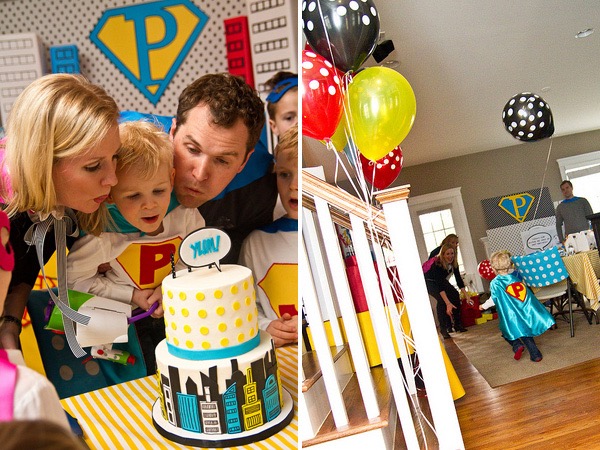 “Being in the “party business”, I always have a vision for what I’d love to do for my own kids’ birthday parties… and of course it usually doesn’t align with what they actually want! My son, Pierson, could not be talked out of having a “Super Hero” party, and although I’m always trying to steer clear of commercial characters, I knew I could take a “Super Hero” party in a whole new direction!

I’ve always been a fan of the striking & vintage aesthetic of Roy Lichtenstein Pop Art, so I decided to have a “Vintage Pop Art” theme to the party. Most moms to boys end up having a super hero party of some sort at one time or another, and I wanted to show that you can have a really interesting, cool & fresh superhero party without having to use commercial characters.

We decided to make this a “Super Pierson” theme and the graphics helped to mold the decor throughout the whole party. I designed a “Super P” graphic that would be repeated throughout the party. We also brought in some of the “icons” of superheros and the traditional big city skyline. Patterns used throughout the party and graphics were representative of old comic books and included halftone patterns, as well as classic “benday dots” (Lichtenstein’s trademark).

KEY ELEMENTS OF THE PARTY

The invitation sent out featured the “Super P” logo along with a vintage skyline and halftone pattern. “Help Pierson save his 3rd birthday” was the tag line. I mixed in comic fonts and layers of patterns to create the “Comic” and Pop Art effect. I embellished the envelope with a return address label that was a conversation bubble, and then a halftone pattern “to” label. We love printing on the glossy labels from onlinelabels.com.

The colors we focused on were aqua, red and yellow mixed with black and white. These colors were great to work with because we were able to find loads of paper products and melamine plates with black/white dots that were perfectly fitting for the party.

The main dessert table featured a large “Super P” logo on the black/white polkadot backdrop. The table also featured “buildings” of varying heights in the red/blue and white colors. These buildings reflected the graphics that we used on the printables. To make them, I purchased boxes of all sizes at my local Home Depot, wrapped them with large scale paper, and added “windows” windows using electrical tape and black cardstock punched with square punches. The desserts were displayed mainly on white lacquer wooden boxes that had black etched trim and a very “POP” vibe.

The focal point of the Candy Bar was a Pop Art style graphic poster (printed by 702signguy.com) that I drew from a photograph of Pierson in his cape/mask. I also added a “conversation bubble” that said “Super Pierson!”. I found clear squared containers in different heights and embellished them with with “windows” made from cardstock to make them look like buildings. I filled them with candies of the colors from the party (red, yellow, aqua/blue). We had a conversation bubble sign encouraging guests to fill treat bags with candies to take home as a favor.

The favor table had bags of red/blue popcorn, Cookie pops (by The Cookie Jar) and bagged cookies, as well as cake truffle pops that were embellished with a “POP” party flag. The treats were displayed in the white laquer boxes that we lined with black/white polka dot wrapping paper. Cookies were bagged in cello bags and tied with a favor hangtag (from our printable package).

Superhero capes were personalized with each child’s initial, and masks were placed at each childs’ table setting.

Lunches were served in white gable boxes that were embellished with a black/white city skyline label that we printed. The skyline graphic had a callout bubble that said “Happy 3rd Birthday Super Pierson” and “Don’t Forget to eat your Vegetables”. The children had markers at their table so they could color their lunch box. We also attached a pop art personalized luggage tag with their name that we printed and laminated.

The lunch box held a HERO sandwich labeled with a “turkey” pop art logo, and a fruit cup embellished with a printable label on the lid… a conversation bubble design that read either “mmm” or “yum”.

I wrapped my bar with aqua ribbon and lined the top of the bar with black/white polkadot wrapping paper.

Layered Jello shots (non- alcoholic, of course!) for the kids: We stuck printable logos on toothpicks out of the jello shots. These were placed on the candy bar.

“POP” can candies were placed at each child’s table setting. I found these cute little pop can candy containers at the dollar store near us and wrapped them with a printable sticker that said “Pop”. The kids loved these!

“HEROs” were served for lunch. I created labels for each type of sandwich using the same style graphic from the printables – labeled them ham or turkey. Stuck a conversation bubble that said “Heros” out of the sandwich tray.

The amazing tiered cake was designed by Got What It Cakes – a city skyline layer and benday dots layer topped off with a “Yum” conversation bubble on top!

Two Sugar Babies came up with fondant toppers out of the “Super P” logo. We used cupcake wrappers in coordinating colors by Bella Cupcake Couture.”

ACTIVITIES FOR THE KIDS

When the children arrived, they were directed to the red “London-style” telephone booth – a DIY project that I made using a refrigerator box! – where they would transform from their secret identity to their super hero character.

We gave all of the children a cape with their own super logo appliqued on the back and a mask. Pierson’s cape and mask were custom made from Kid Kapers. I also made Super Hero sticker logos for each child’s initial that they could put on their shirt.

We had a home Photo Booth for the children to have their pictures taken. We made a fake barbell weight (another DIY project) that the kids could pretend to be lifting over their heads. We also had hand-held signs that said “Boom” and “Pow”. The backdrop was the polkadot/benday dot pattern that was repeated on the dessert table. We also had a printed “conversation bubble” on the backdrop the said “Happy 3rd Birthday Super Pierson”.

I drew the pop art poster of Pierson and had it blown up in black and white – the children played “Pin the logo on Super Pierson” where they would try to stick their own super logo on top of Pierson’s super logo!

I designed a 10-ft long city skyline graphic scene that I had printed on large blueprint scale paper in black and white for the children to color. I posted this “graffiti wall” poster under my bar. The children were allowed to color the city skyline. This was a huge hit for the kids!

We had yellow/red/blue cardboard bricks that the kids enjoyed building walls with and then breaking through them like a super hero!

Custom Cake – Got What It Cakes