Taking a page directly out of American history, a new Declaration of Independence has been signed and adopted by a group of Californians who are seeking statehood separate from their fellow residents in the state.

The “Calexit” movement has been gaining ground for some years, and ironically, it has support from both sides of the aisle (albeit, for different reasons). On one side, many Californians believe that the U.S. Constitution restricts government power too much, and they seek to establish their own country separate from the United States.

Other Californians (mostly in the northern and eastern part of the state) believe that state government has gone a Golden Gate-bridge too far, and they are seeking to either split up the state or form a new state entirely.

In a press release, these pioneers declare that the state’s governing practices have made separation necessary.

On Jan. 15, 2018, a committee of members from several rural counties introduced an initiative to leave the state of California and form New California. In its declaration, the committee used the language of the Declaration of Independence to justify its separatist movement.

When in the Course of human events it becomes necessary for one people to dissolve the political bands which have connected them with another and to assume among the powers of the earth, the separate and equal station to which the Laws of Nature and of Nature's God entitle them they should declare the causes which cause them to separate.

Whenever any Form of Government becomes destructive of these ends, it is the Right of the People to alter or to abolish it, and to institute new Government, laying its foundation on such principles and organizing its powers in such design that is most likely to effect their Safety and Happiness.

The document then turns to the state of California specifically, handing down an indictment of untenable governance that they say has left the people no choice but to pursue their happiness in a newly created jurisdiction.

We the people of the Counties of New California solemnly publish and declare these counties are, and of Right ought to be, a free and Independent State, that we strive to be free from the State of California, and that as a Free and Independent State, have full power to establish and maintain law and order, to promote general prosperity, and to do all other acts and things, which an Independent New California State may rightfully do. We, therefore, the Representatives of the Counties of New California, appeal to the California Legislature and the Federal Congress to pass resolutions to create the State of New California. And for the support of this Declaration, with a firm reliance on the protection of Divine Providence, we mutually pledge to each other our Lives, our Fortunes, and our Sacred Honor.

The movement seeks to do things by the book — that is through Article 4, Section 3 of the U.S. Constitution. It follows a similar approach used by West Virginia to achieve statehood during the Civil War.

The odds are stacked against this vanguard, but it stands resolute in its commitment to create a new state. It will likely be 10 to 18 months before the group is ready to bring its proposal to the state Legislature.

One of the issues working against the group is the fact that California is a very large state and has tremendous sway over presidential elections. Breaking up the state would alter the electoral map, and many Californians would prefer the status quo with 55 electoral votes.

If these breakaways do somehow succeed, the new map would look something like this: 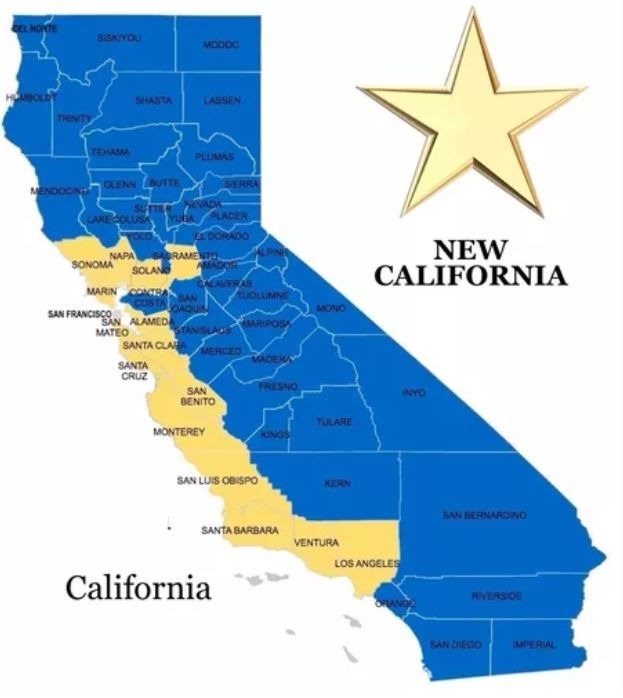 Regardless of outcome, all the power to these people. They’ve tried to effectuate change within the state, but that has become all but impossible. It appears to be time for a new strategy — one that respects the process and does not harm the union.

Do you support splitting California into two states?​