Study Shows Overwhelming Costs of Opioid Crisis Across US Counties

The widespread nature of the opioid crisis in America is simply shocking. In 1999, there were 8,048 opioid overdose deaths in the United States, but in 2016 that number increased to an astonishing 42,249. Along with the loss of life, there is also a massive loss to the economy as well, and only now are we beginning to see just how high that cost is.

Back in January, TPOH shared a story previewing data from Alex Brill and Scott Ganz, researchers who calculated overall the costs of the opioid crisis in America. Topping the list in terms of per capita cost was West Virginia at nearly $4,378. The researchers have just released the complete data, and the results show just how devastating, if not uneven, the costs are to various areas of the nation.

In addition to its devastating impact on families and communities, the opioid epidemic is costing the US economy tens of billions, if not hundreds of billions, of dollars annually. The types of costs attributable to opioid abuse – health care costs, criminal justice costs, and lost productivity, for example – are fairly well understood, as is the economic impact of the crisis at the national level. However, the economic burden of the opioid epidemic is unevenly distributed across the country, with many communities especially hard hit. As federal, state, and local policymakers and stakeholders seek to curb the epidemic, it is vitally important that they know how these costs are distributed.

The researchers included a visual map of the costs throughout all counties in the United States based on non-fatal costs and total opioid costs. The images speak for themselves. 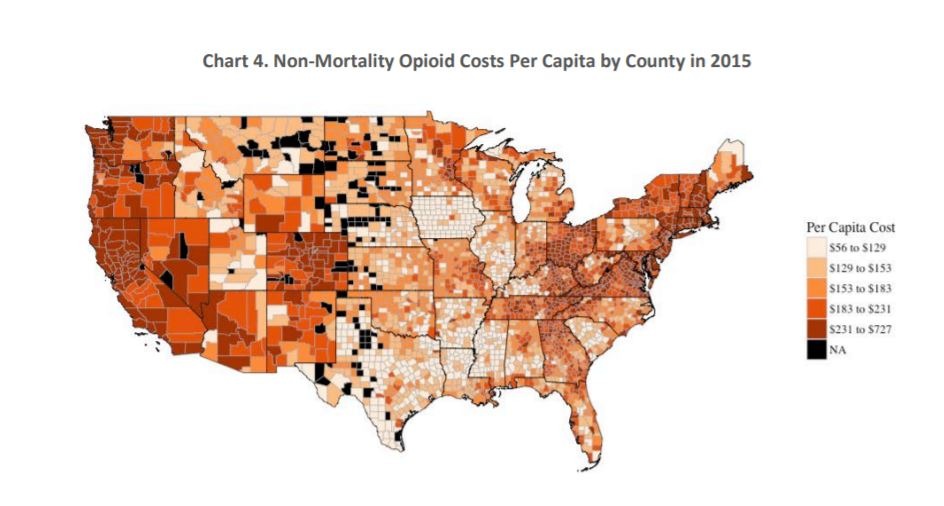 While the crisis is national, there is a great deal of variation in how the crisis impacts different regions.

We estimate per-capita state-level and county-level non-mortality and total economic burdens of the opioid crisis in 2015 by distributing national estimates based on variation in local wages, health care costs, and criminal justice costs along with variation in opioid-related death and addiction rates, and average age-adjusted value of statistical lives lost. Our findings indicate that among the lower 48 states in 2015, per-capita non-mortality costs were highest in the District of Columbia ($493) and New Hampshire ($360). Median per-capita non-mortality costs were $205 in Kentucky and Pennsylvania. Per capita total costs (including mortality costs) were highest in West Virginia ($4,378) and the District of Columbia ($3,657). Median per-capita total costs were $1,672 in Nevada.

Non-mortality opioid costs per capita in West Virginia appear to be less than those in California, but the total cost is far higher than any other U.S. state. The researchers explain that "non-mortality results are driven by a combination of abuse rates and health care costs, and the total costs are driven primarily by estimated deaths per capita."

The researchers conclude by stating that it is important to understand this data at the state and local level so that appropriate resources can be allocated.

As overdose deaths and costs associated with opioid abuse rise, policymakers are increasingly looking for ways to stem the epidemic. Identifying the local per capita economic burdens should inform policymakers in this effort.

Have you or a loved one been affected by the opioid crisis? What are some possible ways to reduce the number of opioid overdose deaths? Share your thoughts and experiences with us.