The Future of AI: Robots Taking Over, Or More of What We Already Have?

With the development of artificial intelligence technology, there also came all sorts of predictions about how robots would make humans unnecessary and maybe even extinct one day. Images of robots creating new, smarter robots can easily flood the imagination, prompting all sorts of fears about how automation is going to eliminate all sorts of human jobs. But is that really going to happen?

Technology scholar Bret Swanson believes that the fear and hype over the future of AI is overstated. Rather than taking away from humanity, the development of AI will contribute greatly to the value of all sorts of industries, which means higher standards of living for nearly everyone as a result.

Now that we’ve digested and downgraded many of the scary proclamations, perhaps it’s time to get down to business. In a new report, for example, McKinsey Global Institute estimates that AI could generate incremental value of between $3.5 and $5.8 trillion annually across nine business functions in 19 industries.

Most of this value does not come from sci-fi scenarios of machines inventing other machines but from substantial improvements in things less sexy — marketing and sales efficiency, for example, or supply chain management and manufacturing yields. McKinsey estimates that AI, at least in the foreseeable future, will have the largest dollar impact in industries like retail, transportation and logistics, travel, and consumer goods, possibly generating value of $400–$600 billion per year per industry. 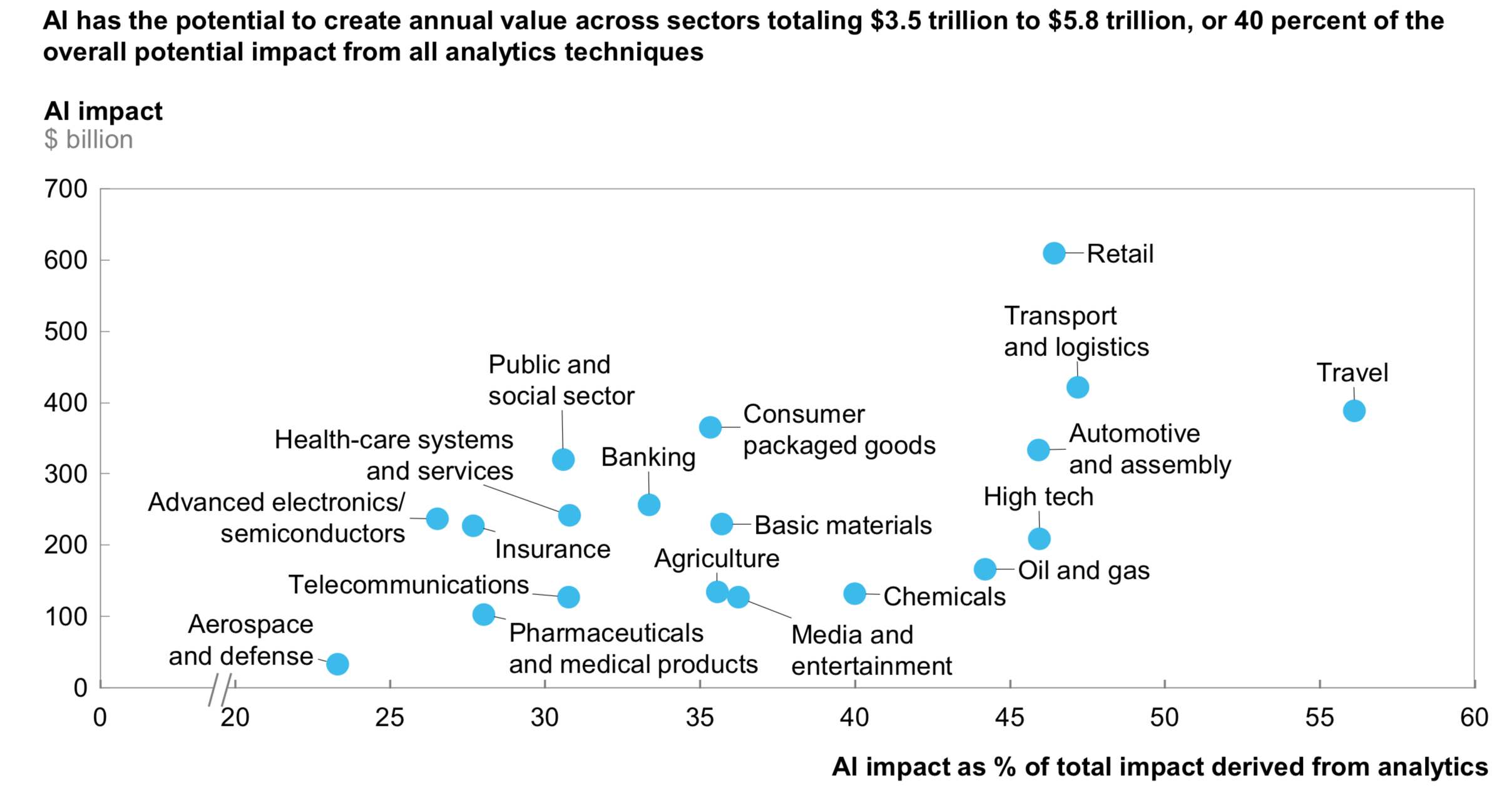 Here's one of the interesting things about this report as well. Because the projections are limited only to existing markets and applications, the potential value could be even higher as new types of products and markets develop.

But in the development of these technologies, does not the possibility of humanoid AI exist? Possibly, but there are other things that are more worth focusing on, as Swanson mentions.

Berkeley professor Michael I. Jordan has also been trying to demystify AI and describe its nearer-term effects. He breaks AI down into three categories: (1) the futuristic movie version that seeks to fully replicate or imitate human intelligence; (2) technologies, such as search engines and natural language translation, which augment human intelligence; and (3) intelligent infrastructure that will help connecthumans and things and intelligently process vast real-time streams of real-world data, as with the Internet of Things or autonomous vehicle networks. Jordan urges us to focus on the latter two categories — intelligence augmentation and intelligent infrastructure.

The future of AI, in Swanson's assessment, is not that it will replace or surpass human beings, but that it will greatly augment what we will be able to do. In order for AI to be able to process situations and decisions the way humans do, they would require an absolutely astronomical amount of logical rules to navigate all the complexities that is day-to-day human life. That kind of AI is not likely to be here any time soon.

Are you looking forward to how AI will influence our economy and daily lives? What concerns might you have about its development? Let us know what you think!