Sociologists, addiction experts, American policymakers, and family and friends frequently discuss the "cost" of the opioid epidemic on America in terms of torn families, lost lives, and destroyed communities.

The loss of a family member doesn't have a pure dollar figure on it. There's no way to estimate grief. But there are measurable costs to the addiction epidemic that takes nearly 33,000 lives in the U.S. each year.

That's the number that health care economist Alex Brill reached as an estimate for the costs in fatal and nonfatal expenses associated with the addiction epidemic in 2015.

Brill used data from researchers at the Centers for Disease Control and Prevention and the White House Council of Economic Advisers. Nonfatal costs, that is, spending on health care and substance abuse treatment, criminal justice costs, and lost productivity associated with abuse and misuse of opioids, were $72.3 billion in 2015. Fatal costs, which includes an estimate of the life unrealized — measured as a person's potential earnings had he or she lived — totaled $431.7 billion.

Brill offers a sneak preview of his groundbreaking study to show that the cost of this epidemic is uneven and disproportionate across the U.S.A.

Controlling for the variation in population by estimating costs on a per-capita basis, the results for some states are simply breathtaking. Consider, these numbers are PER RESIDENT. That means everybody, including people who never touched the stuff. 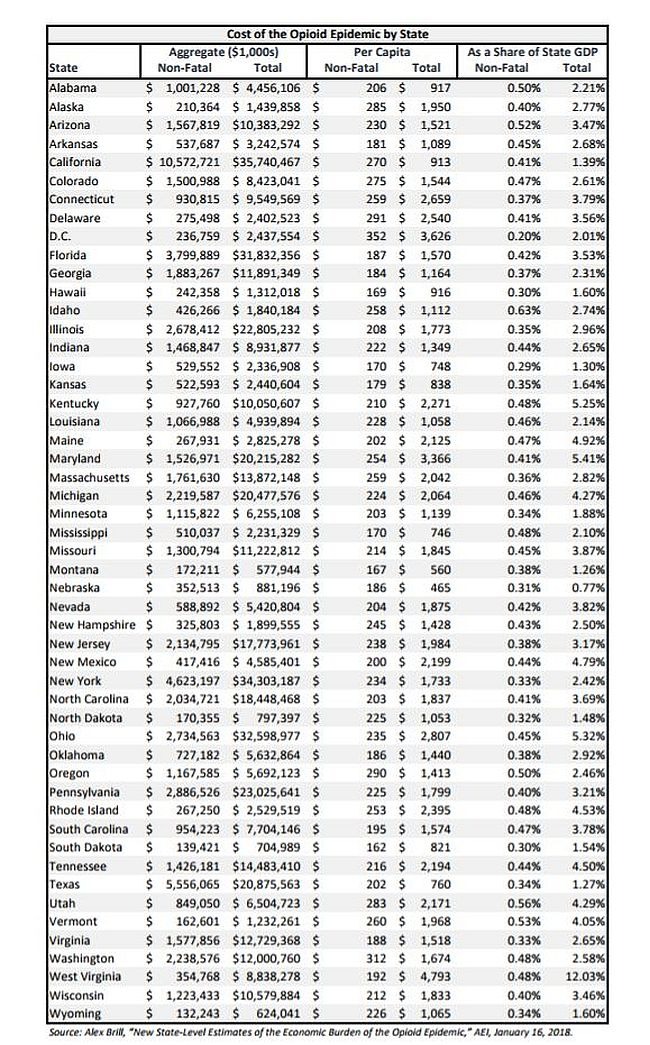 ​The abuse of opioid drugs creates hardship for those who are hooked, for their families, but also for the entire country. There are costs all the way down the line.

While policymakers consider how to deal with the crisis, Brill emphasizes the importance of understanding how the costs are distributed so that resources to combat the epidemic can be allocated accordingly.

Are you surprised by how high the per resident costs are of the opioid epidemic? Has it affected you financially or among your family and friends?