Twitter is Not A Place for Political Moderates, Study Shows

Social media has arguably been one of the forces of division in our society. It's easy to see the most extreme examples of this view and that view, and those who are not as far left or right are often left out of the picture. This is especially true on Twitter, where political polarization is rather pronounced.

A study published by Dan Hopkins, Associate Professor of Government at the University of Pennsylvania, along with Daniel Preotiuc-Pietro, Ye Liu and Lyle Ungar, revealed that Twitter is a particularly divided social media platform, with little room for moderates.

Our research surveyed 3,938 Twitter users1 who together generated 4.8 million tweets that we downloaded in August 2016. We then coded the most common 12,000 words based on whether they were political, either because they used an explicitly political term (say, “president”) or a proper noun that was likely to be political (“Romney,” “Maddow” or “CNN”). In all, we found just 293 of the 12,000 words to be political.

The number of people who tended to be very political was very small, but of those who fell into that category they were often leaning strongly in one direction or another.

Even though we might expect a sample of Twitter users to be more political than the U.S. population overall, we were surprised to see that the use of political words was concentrated among the small group of respondents who term themselves “very conservative” or “very liberal.” Take a look at at the chart below, which illustrates who is using these political terms. The C-shaped pattern makes the core result clear. It’s primarily those people on the ideological extremes who use political terms with any frequency. In other words, if someone tweets about politics, they are likely to label themselves as on the edges of the American ideological distribution. People who deem themselves “very conservative” or “very liberal” seem to be telling us as much about their level of political engagement as about their policy positions.

The chart below shows the distribution of the types of words that those studied used. 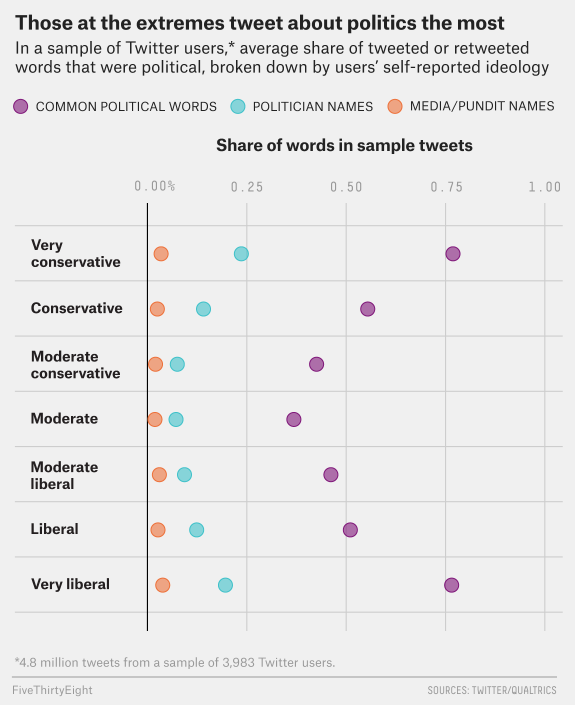 One of the most interesting finds was that political leaning was not so much defined by policy positions and certain political words, but by two distinct non-political factors: extreme conservatives were more likely to use words that described religion and family relationships, while extreme liberals often used words like "gay," "racism," and "Sanders."

So if you're on Twitter, and feel like an outcast, you're probably not alone. The extremes on both sides are overshadowing anyone who may not fall on either side to such an extent. It's even more likely that you're not on Twitter at all, as only a small minority of survey respondents in another part of the study revealed. What happens there only represents a small portion of our society, not the whole.