What is the Internet Really Worth To People?

The Internet and all the associated programs and gadgets associated with it have become a staple of life in the 21st century. From computers, to mobile phones, to email, to Facebook, the products from Silicon Valley have radically transformed out lives in unimaginable ways.

So what they are worth to us? It can be difficult to determine how much a free service is worth to someone, but in a new working paper, titled “Using Massive Online Choice Experiments to Measure Changes in Wellbeing,” economists Erik Brynjolfsson, Felix Eggers, and Avinash Gannamaneni attempt to do just that.

James Pethokoukis, editor of the AEIdeas blog, described the what the authors found.

One way to get at the “consumer surplus” issue is to cleverly ask consumers how much they would have to be paid to forego use of this or that service.

Here's what the economists found:

The results indicate that Facebook provides substantial value to consumers who would require a median compensation of about $40-$50 per month for leaving this service. . . . According to the median [willingness-to-accept estimates for 2017], Search Engines ($17,530) is the most valued category of digital goods followed by Email ($8,414) and digital Maps ($3,648). One possible reason that these values are high relative to the other goods in our analysis may be the lack of effective substitutes for search engines, email or digital maps compared to the other categories in our sample. . . . Video streaming services (e.g., YouTube, Netflix) are valued by consumers with a median WTA of $1,173 per year. Some consumers do pay for some of these services. However, these amounts are of the order of $10-$20 per month, or $120-$240 per year (for those who pay). Our measure suggests that the surplus the median consumers receive from these goods is a 5-10 multiple of what they actually pay (and which is visible in national accounts). The remaining categories for which we estimated the median WTA are (in descending order) E-Commerce ($842), Social Media ($322), Music ($168), and Instant Messaging ($155).

To visualize, check out the graph below: 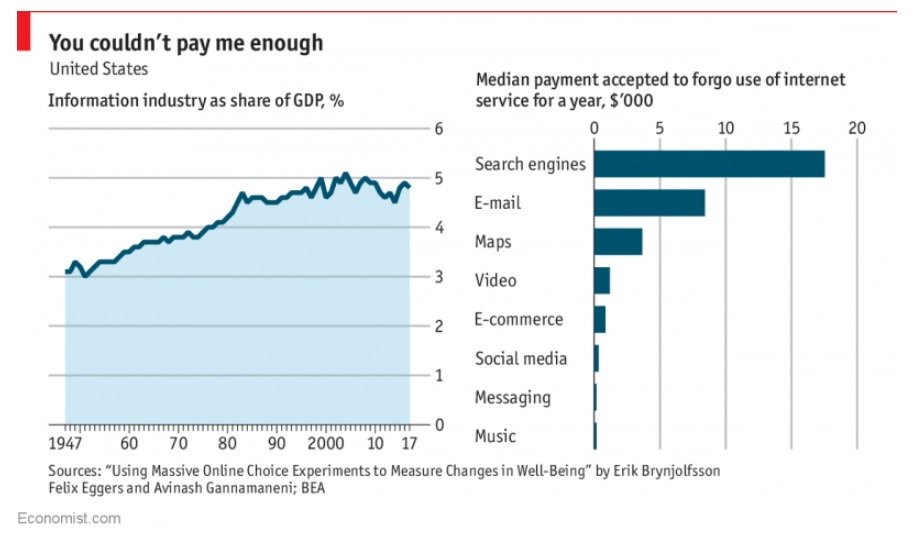 One caveat to the study: the data don't necessarily apply to all Americans. An estimated 15 percent of Americans don't use the Internet, so the results are only relevant for a certain segment of the population. However, for those who do use the Internet on a somewhat frequent basis, its utility can be calculated be in the tens of thousands of dollars per year.

Do you think this is a valid measure of value? What would it take for you to give up these online services? Let us know your thoughts!