The Single Biggest Factor in Social Mobility and Poverty Prevention

Getting rid of the stumbling blocks that help us achieve social mobility, prevent poverty, and pursue happiness is part of the reason TPOH exists. But equally important is recognizing the institutions that enable people to pursue happiness in the first place.

No. 1 among them? The family. The most prominent institution that enables people to escape and stay out of poverty, and to experience social mobility, is the family. And the family is most successful when it follows the "success sequence" — education, marriage, children — in that order. The research on this subject is thorough and convincing.

In November, Glenn T. Stanton wrote a column for The Federalist tackling this issue. He revealed just how shocking the numbers are — and it’s not a partisan issue in any way.

Different factors have been attributed to poverty aversion over the decades.

Now combine those factors, and witness the winning formula!

Professor Bill Galston, President Clinton’s domestic policy advisor and now a senior fellow at Brookings, explained in the early 1990s that an American need only do three things to avoid living in poverty: graduate from high school, marry before having a child, and have that child after age twenty. Only 8 percent of people who do so, he reported, will be poor, while 79 percent who fail to do all three will.

The defining attribute that puts people into a higher socioeconomic status is marriage and family, specifically keeping the traditional nuclear family structure. It’s not a moral argument about right and wrong, but one of cause and effect.

That fact remains true today, as research from the Brookings Institute and American Enterprise Institute has demonstrated. While education and employment rates have fluctuated over the decades, the effect of marriage on success is simply beyond deniability.

Some of the key points from the study are as follows:

There is just something about marriage and family that acts not only as a safety net, but almost a turbocharger into success in other areas of life.

Look at the following graph, which documents categories test subjects fell into based on the order of their family path. 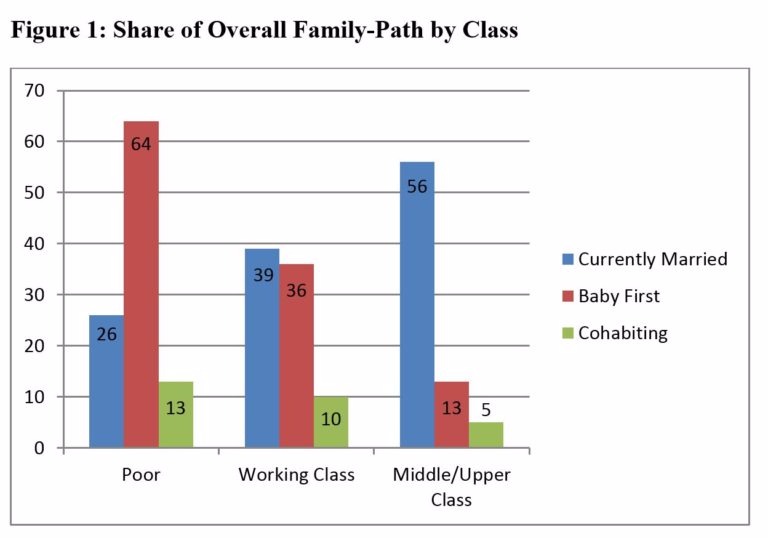 Encouraging marriage and family unity is not a criticism of people who've not followed the success sequence. It's an acknowledgement that family structure is a stabilizing force.

Society is drifting away from the idea that marriage is necessary for personal happiness. However, the data tell a different story, as those who are merely cohabitating or having kids while unmarried are more likely to experience greater hardships.

Marriage is not a ball and chain, but a vehicle that enables couples to more easily pursue a happier life.

Marriage takes work, but the results prove that this kind of work pays off.

Have you followed the success sequence? How is it working out? Share your thoughts on the subject.

Are you an extreme coupon clipper? How's that working out? Maybe pretty good, you're saving money. Or maybe you're spending to save. Or maybe it takes way too much time and you abandoned this strategy for living with fewer expenses.