An Alternative View on Trade: Consider Total Volume of Exports and Imports

A common criticism of a nation having "trade deficits" is that our economy is dependent on other nations for our goods, and that our economy would be healthier if we exported more than we imported; the idea of being economically independent. However, the health of a nation's economy is not determined by how "independent" it is. Rather, a great deal of international trade, and a large amount of imports, show that an economy is very healthy.

Economics professor Mark Perry discusses this way of looking at the economy, seeing how a large volume of exports and imports shows that an economy is strong. In fact, in February of this year, the total volume of trade reached a new record, demonstrating that the U.S. economy is very strong right now. 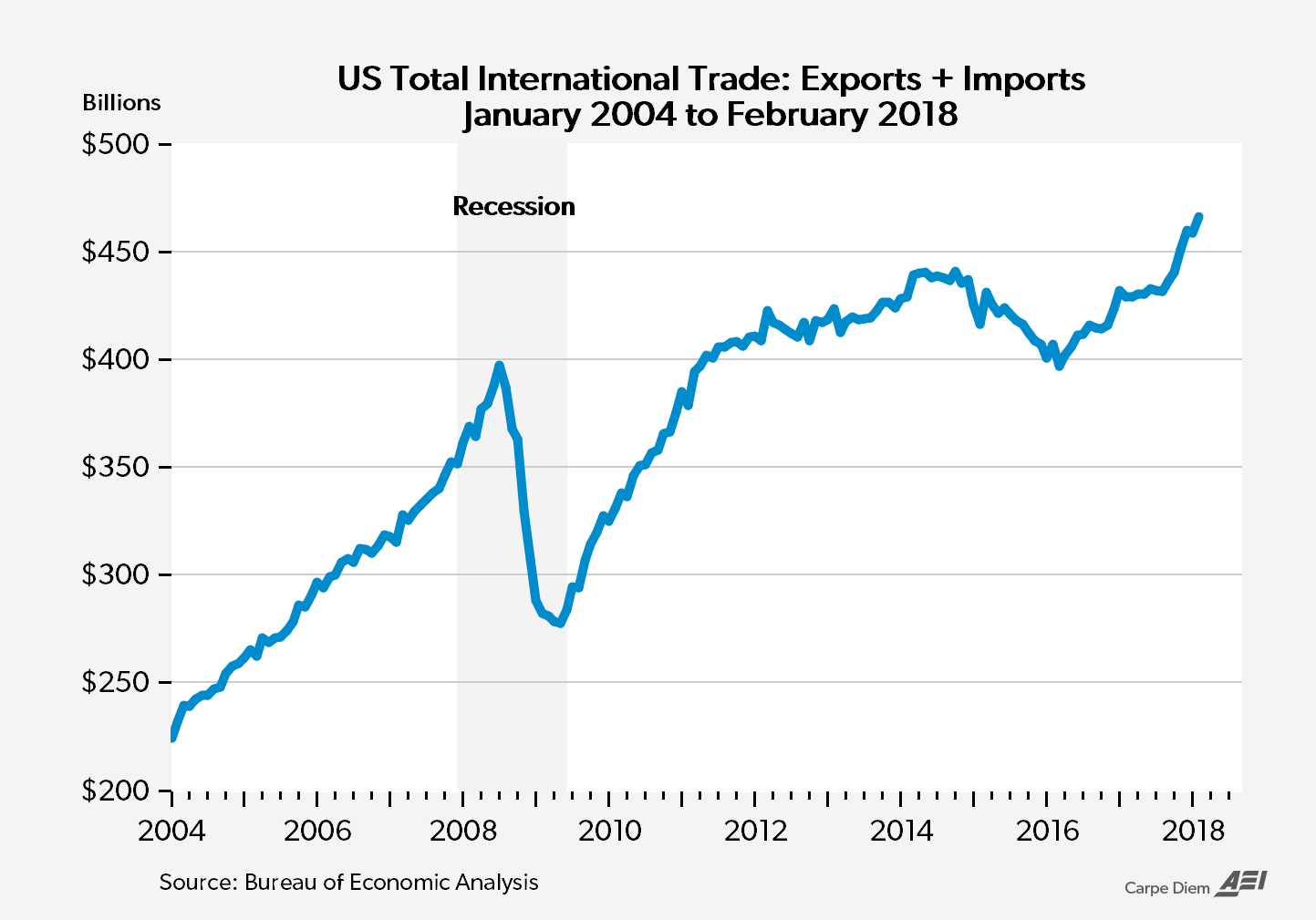 As I have done in the past, I present an alternative measure of monthly international trade in the chart above, where instead of subtracting imports from exports to calculate the trade deficit, I add exports and imports together to measure the monthly dollar volume of total international trading activities. Because both exports ($204.4 billion) and imports ($262.0 billion) reached all-time record highs in February, the total trade volume also set a new monthly record high of $466.4 billion. It really doesn’t make sense to treat international transactions as a positive contribution to the US economy when an American company sells its goods overseas, but as a negative contribution when a US company buys foreign inputs for production or assembly in American factories. Both activities — American companies buying imports/inputs and selling exports/output — are important economic transactions and contribute to the total volume of trade each month and to the overall US economy.

He goes on to quote several economists from First Trust Advisors, who further solidify the point on total volume of trade.

When President Trump sees an increase in February’s trade deficit he’ll think it confirms the world is “killing” us on trade. But what really matters, and what President Trump and other policymakers should be focused on, is the total volume of trade – imports plus exports – that signals how much value consumers find in the global economy. Looking at it from this perspective, total trade boomed in February, growing by $7.9 billion. Although the trade deficit rose to near a nine and a half year high, the total volume of trade rose to a new record all-time high in February. Exports grew by $3.5 billion while imports increased by a larger $4.4 billion.

To get a fuller picture of how the economy is doing, other factors need to be considered. In Perry's assessment, the amount of trade we do reflect on how well our economy is doing overall. Large volumes of trade, especially if imports exceed exports, show that we are in good standing.