My hometown is Baltimore, Md., and it's very underrated despite the rightfully earned reputation as a violent city. It's a really cool arts and music center. It has great restaurants (I argue better restaurants than upscale D.C.). There are so many festivals and waterways that boating and entertainment are central to living in the city and its surroundings.

No one ever hears about that on the national news. They hear the horrible stuff. And it is horrible — gangs of kids, some as young as 10 years old, going around beating up people in the beautiful Inner Harbor. City blocks that are magnets for crime. Can you imagine living in a neighborhood with four murders in three years - and no resources to leave and get out of dodge?

The only thing to do is make it right. And Baltimore's police force is on the front lines trying. So it has been an especially sad couple weeks after a string of murders culminated in the death of a well-respected 18-year veteran Baltimore police detective, who was gunned down — his own weapon turned upon him — while investigating a homicide.

The city's police chief has been unwilling to discuss it. The rumors are flying that it was an inside job. That's a very tough pill to swallow if true, which no one is saying it is (though there's a history of corrupt police officers in this city spanning back decades upon decades).

But on this unseasonably warm Wednesday at the end of November, the city (and county) stood still and paid tribute to Det. Sean Suiter. Maryland's governor, Larry Hogan, attended his funeral and gave remarks met with applause. The city's mayor, Catherine Pugh, also spoke. A bunch of local dignitaries were in attendance. The event was carried live on talk radio.

Most notably, the 695 Beltway around the city turned to stillness — a sorrowful line of respect for this fallen officer. People hoisted American flags on highway overpasses as fire trucks and police vehicles came to rest in long rows on the side of the road. People lined the sidewalks on side roads or waited on the shoulders in their cars to glimpse the funeral procession as it passed.

Thousands of people stopped what they were doing to show respect for a loving father and husband, an Iraq war veteran, an esteemed colleague.

"Police officers and firemen, they put their lives on the line for us, the citizens. This is the least I can do is pay my last respects at this site," citizen Phil Buddemeyer told local television WBAL-TV. 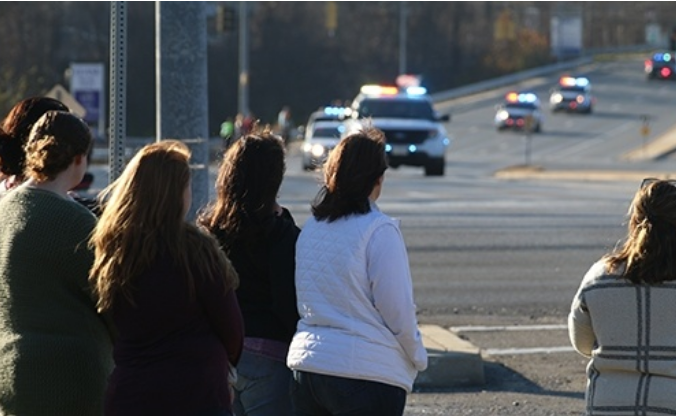 It's a shame that it takes an inexplicable and highly suspicious murder to make this city collectively sigh and realize how important our police force is in protecting us from people who've chosen to not be members of civilized society.

Prayers up for Suiter's family and our entire community. May he rest in peace and may his killer be brought to justice, for all our sakes.

Too make it all worse — same day as the funeral, a different cop gets shot. He had a "minor" injury because the bullet went straight through the palm of his hand, but police media relations spokesman T.J. Smith, whose own brother was murdered earlier this year, said just because he wasn't killed doesn't mean "it's OK." It's not a relative comparison when a detective dies and another officer doesn't die. They were both shot on the street while doing their jobs! Not good.