The Trade Deficit Has Not Made Americans Poorer - Quite the Opposite

In the discussion about whether or not President Trump's tariffs on steel and aluminum are a good idea is the assumption that trade deficits are bad for Americans, and that an imbalance of trade is impoverishing people across the board.

The truth is that this assumption is false. As imports have increased, and the "trade deficit" right along with it, Americans have become more wealthy in terms of household net worth.

Consider economic professor Mark Perry's discussion of the subject. He revealed that as the trade deficit increased, so did Americans' net worth.

Thanks to the rally last year that brought the stock market to new record highs with a gain of 19.5% from 2016, household net worth rose to nearly $99 trillion last year, which was a $9.0 trillion (and 10.5%) increase over the previous year and the largest one-year dollar increase in history. Not bad. Despite a $570 billion trade deficit last year that Trump is always complaining about and threatening to address because it’s “very one-sided and unfair” and a form of “rape” when it comes to China, the US stock market reached record highs in 2017, bringing the net worth of American households to a new record-high of $99,000,000,000,000. 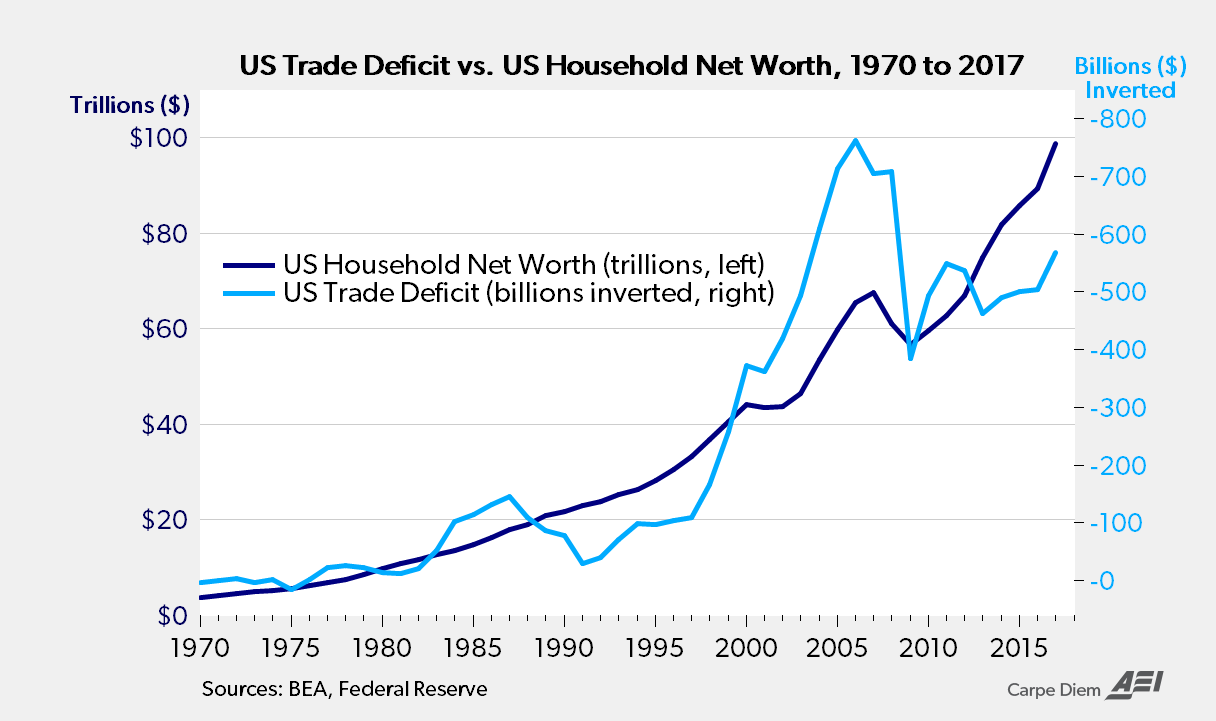 There's simply no denying it: with more imports, Americans have become much more well-off since 1970. We have a wider variety of products on the shelves, and a lot more wealth to our names on average. Consider one way it has been put:

A rising U.S. capital-inflow surplus does not mean that Americans are losing net wealth. Quite the opposite, as reality turns out.

While the president may present the trade deficit as something that's harming Americans, the data tell the exact opposite story. Consider another way to think about it, as Rep. Justin Amash put it in a Twitter thread:

This basic economic concept applies to international transactions just as it applies to neighborhood transactions. Trade deficits are a feature, not a bug, of a system of voluntary exchange.

Only in a (theoretical but not possible) system of total government control and central planning could trade deficits be eliminated—and that would be a world of universal slavery and extreme poverty.

To sum things up, it's okay to be bringing in more than we're sending out. It's our free market operating freely.

To me this seems so simple. If you think of it as a household, it's better to have more coming in than going out. That example Justin Amash used was right on point. There are similarities between a household economy and a nation's economy (to some degree), the "trade deficit" being one of them.