Wow. Just wow. Every year, movie theaters bring us their share of surprises – both good and bad. Suburbicon goes immediately to the front of the line of contenders for the most disappointing film of 2017. George Clooney, the Coen Brothers, Matt Damon, Julianne Moore, Oscar Isaac – how can so much talent result in such a monumental dud?

Suburbicon is a tonal disaster – an awkward and ineffective attempt to blend dark comedy with social commentary. Two mostly unconnected stories are presented in parallel and not only are they insufficiently developed for viewers to care about either but they are so out-of-synch in presentation that the jarring differences can cause whiplash. Almost nothing in the film works – the narrative is leaden, the comedy is unfunny, the satire is tired and obvious, and the camerawork (by Oscar winner Robert Elswit) is pedestrian. 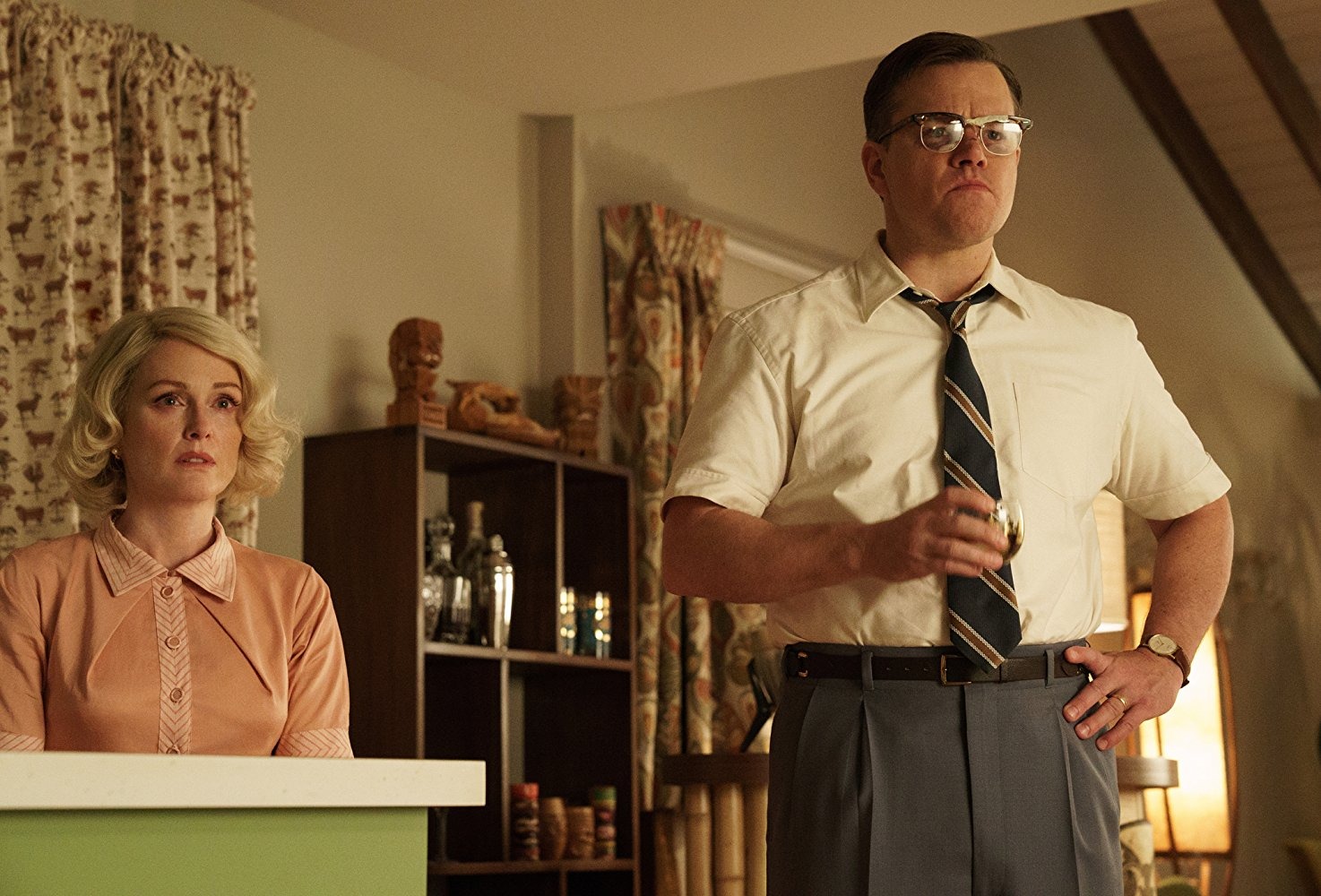 There are two stories. The first, which absorbs a majority of the screen time, focuses on the Lodge family: dad Gardner (Matt Damon), mom Rose (Julianne Moore), and son Nicky (Noah Jupe). They’re a seemingly normal (white) family living in Suburbicon: a 1950s suburban paradise modeled after Levittown. (The movie opens with an era-appropriate TV commercial for the oversized development.) When two thugs (Glenn Fleshler and Alex Hassell) break into the house and kill Rose, things feel more odd than tragic. It soon becomes clear that Gardner isn’t on the level and, in a really weird twist, Rose’s twin, Margaret (also Julianne Moore), moves in to take her sister’s place. A suspicious insurance investigator (Oscar Isaac) soon shows up to figure out whether his company can get out of honoring Rose’s policy.

Meanwhile, next door, a fine, upstanding family has moved in. The Meyers seem perfect for the cookie-cutter neighborhood of Suburbicon, except for one thing: they’re black. In this bastion of white supremacy, there can be no greater sin. At first, they’re heckled. Then they’re badgered. Then a race riot breaks out in their front yard. The police are so consumed with “controlling” (a code word for enabling?) this situation that they don’t notice the criminal goings-on at Gardner’s house. In terms of tying the two stories together, that’s the closest Clooney gets to making a connection - a feeble and half-hearted one at best.

Chewing glass might be more appealing than trying to choke down Suburbicon’s sanctimoniousness. Now, I believe Clooney’s heart is the right place but his inability to give life to his beliefs without resorting to such an unwieldy and condescending subplot is head-spinning. If one looks at Clooney’s directorial filmography, however, a pattern emerges: he’s a better actor than director. Despite having the best talent available to anyone working in Hollywood, his movies misfire at a roughly 50% rate. Suburbicon joins Confessions of a Dangerous Mind and The Monuments Men in this category.

To make this film, Clooney and his writing/producing partner, Grant Heslov, dusted off an unused Coen Brothers screenplay from 1986. (For reference, that’s post-Blood Simple but pre-everything else.) Clooney then did a rewrite, adding in the Meyers’ piece of the narrative and making other changes. It’s impossible to say whether the reworking of the story killed it or whether it simply wasn’t very good to begin with but the end result speaks for itself. 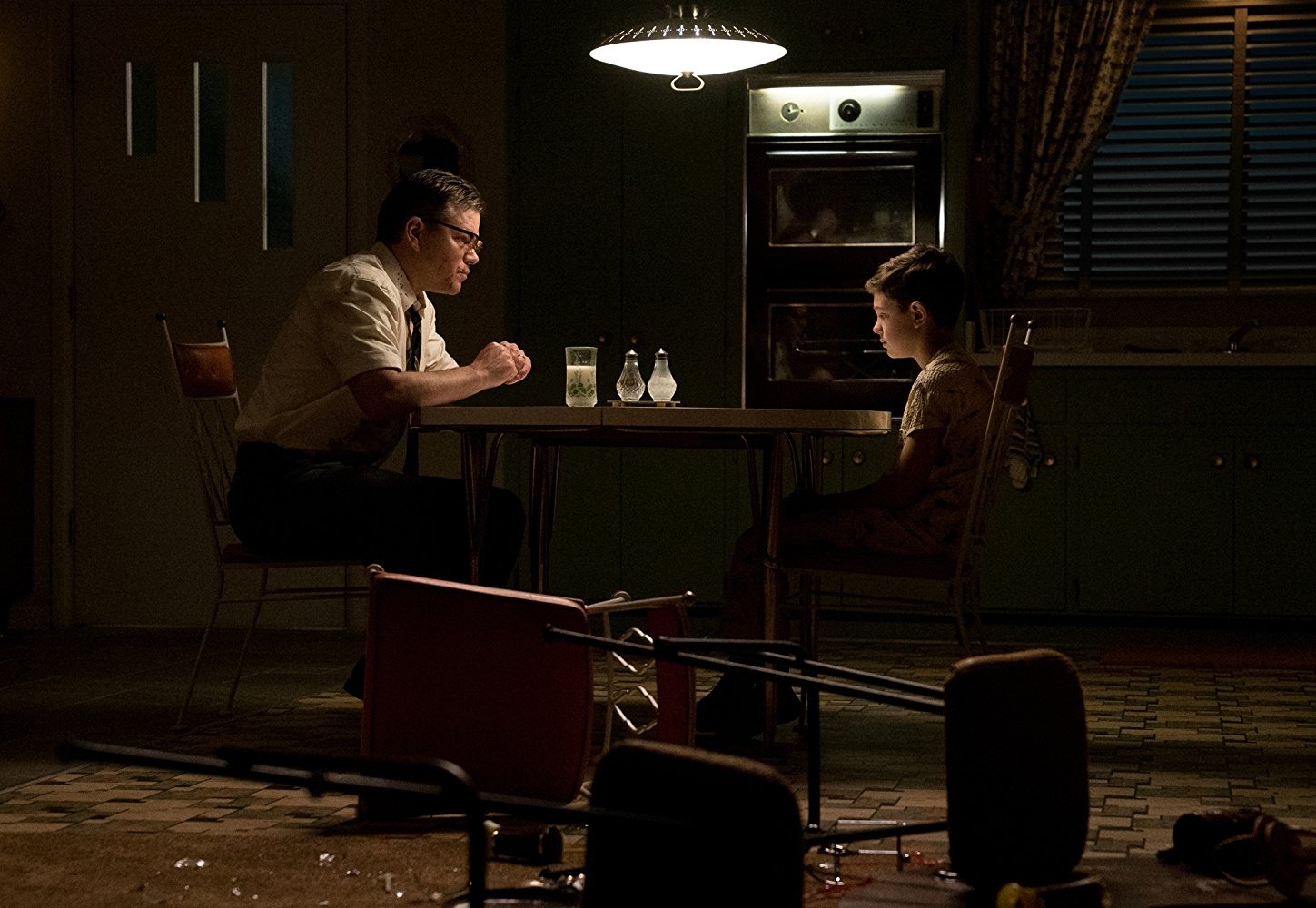 The movie is told from Nicky’s perspective because, quite frankly, every other character in the film not named Meyers is loathsome. The Coens have made a career out of filming the sordid tales of unlikable characters but Clooney doesn’t have their talent and the result is nails-on-the-blackboard unpleasant and it gets worse when he throws morsels at the Meyers – as if we’re supposed to care about this marginalized subplot about the evils of hate based on skin color. (For the record, the movie was in the can before the Charleston riot, so there’s some bad timing involved in its release. Not that Suburbicon would have been any better had it been released a year ago.)

I’ll give props to Oscar Isaac, who brings energy and urgency with him in his few short scenes. He seems to get what the Coens were aiming for – it’s just unfortunate that Clooney didn’t. (This is surprising since Clooney has appeared in more Coen Brothers films than Isaac.) Matt Damon’s experience with the Coens numbers a single movie – the rather un-Coen-like True Grit remake – but he has a long history of collaboration with Clooney. His performance here is off-key, regardless of whether the movie is being seen through the bloody thriller lens or the dark comedy one.

The only thing that will likely prevent Suburbicon from a possibly deserved space on my end-of-the-year Bottom 10 list is that there are too many blatantly incompetent films to be considered. Make no mistake, however, there’s nothing here to recommend and much to warn audiences away from. It’s hard to imagine anyone enjoying this film on any level. Tedious, disjointed, and pointless, this is probably the worst output in many years we have seen from such an august group of talented participants. The Razzies await.

Although probably a little too long, the film succeeds in being both emotionally forceful and dramatically satisfying.

Sing Street is John Carney’ Valentine to the people and places of his youth.