The Federal Deposit Insurance Corporation released its Quarterly Banking Profile for the Fourth Quarter of 2017 on February 2017. With the new tax law there's a one-time increase in income taxes on a revaluation of deferred tax assets and repatriation of income from foreign subsidiaries.

Wall Street continues to like bank stocks due to the increase in interest rates by the Federal Reserve. However, the FDIC continues to throw cold water on this notion. The concern is that some banks have been reaching for yield in a low interest rate environment. They are investing in higher risk longer-term assets versus short-term deposits, and interest rates on deposits will rise resulting in narrower net income margins.

The FDIC cautions that banks must ‘manage interest-rate risk, liquidity risk, and credit risk carefully to continue to grow on a long-term path’.

I consider the FDIC Quarterly Banking Profile as the balance sheet of the U.S. economy. In my opinion, the banking system has not fully-recovered from the “Great Credit Crunch” which began more than ten years ago.

Fourth quarter FDIC data show that Quarterly Net Income came in at $25.5 billion down 41% year over year but adjusted for tax effects it would have been $42.2 billion slightly below the reading of a year ago.

Net operating income increased in the fourth quarter year over year to $192.2 billion up 5.5%. The increase came on higher net interest income, but noninterest income continued to slide due to lower servicing fees, trading and lower net gains on loan sales.

I have been concerned about growing credit card debt, which grew by 8.2% year over year to $865 billion. Banks experience a slight increase in net charge-offs led by credit cards. Have you noticed that you are getting fewer credit card offers at low teaser rates? In addition, I have received numerous notices that my credit card rates will be higher in April. So much for the pledge to help households and small businesses on Main Street!

The FDIC Quarterly Banking Profile For The Second Quarter Of 2017 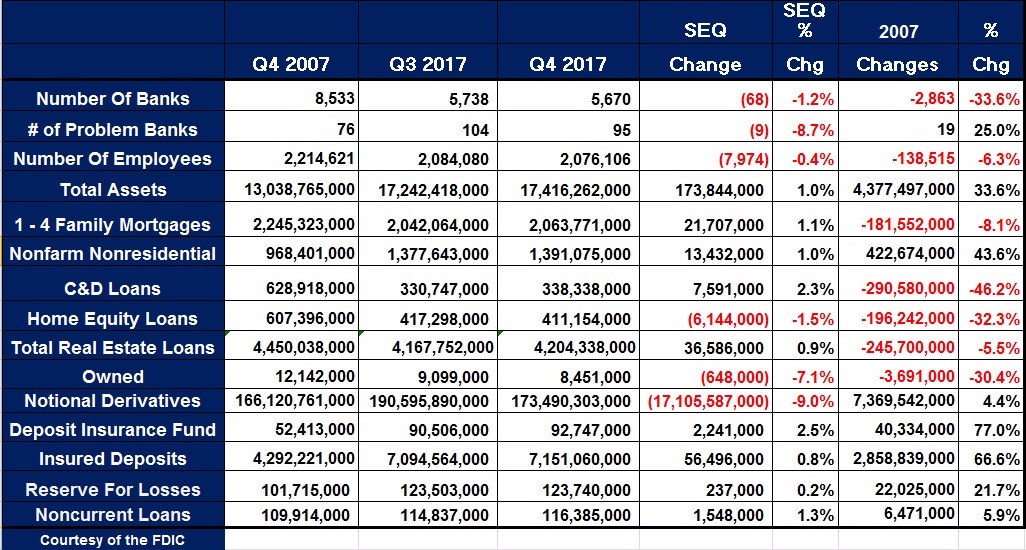 The number of FDIC-insured financial institutions fell to 5,670 in the fourth quarter down from 5,737 in the third quarter. At the end of 2007, there were 8,533 banks with only 76 on the problem list versus 95 today. The number of employees in the banking system decreased to 2.075 million in the fourth quarter down from 2.083 million in the third quarter. The banking industry is not adding employees and total employment is down 6.3% from 2.214 million at the end of 2007.

Residential Mortgages (1 to 4 family structures) represent the mortgage loans on the books of our nation’s banks. Production rose to $2.06 trillion in the fourth quarter, still 8.1% below the pace at the end of 2007. Mortgage lending thus lags its potential.

Nonfarm / Nonresidential Real Estate Loans represent lending to construction companies to build office buildings, strip malls, apartment buildings and condos, a major focus for community banks. This category of real estate lending expanded to a record $1.391 trillion in the fourth quarter, up 43.6% from the end of 2007.

The banking system has been building exposures to Nonfarm Nonresidential real estate loans, and face the risk of defaults as retail stores and malls are shuddered.

Construction & Development Loans represent loans to community developers and homebuilders to finance planned communities. This was the Achilles Heel for community banks and the reason why more than 500 banks were seized by the FDIC bank failure process since the end of 2007. C&D loans rose to $338.3 billion in the fourth quarter up 2.3% from the third quarter, but 46.2% below the level at the end of 2007.

This is evidence that market for new homes is well below potential.

Home Equity Loans represents second lien loans to homeowners who borrow against the equity of their homes. Regional banks typically offer HELOCs, but these loans continue to decline quarter over quarter, despite the dramatic rise in home prices. HELOC lending declined another 1.5% in the fourth quarter to $411.2 billion and is down 32.3% since the end of 2007. The Dodd-Frank law makes HELOC lending a paperwork nightmare.

Real estate lending is supposed to be a driver of economic growth but has been disappointing.

Other Real Estate Owned declined by 7.1% in the fourth quarter to just $8.5 billion as formerly foreclosed properties return to the market. This asset category peaked at $53.2 billion in the third quarter of 2010.

Notional Amount of Derivatives declined significantly in the fourth quarter by 9% sequentially to $173.5 trillion. This exposure is still up by 4.4% since the end of 2007. It seems like the banking system may be reducing trading activities as such has been a drag on earnings.

Deposit Insurance Fund represents the dollars available to protect insured deposits. These monies are funded by all FDIC-insured institutions via annual assessments, with the largest banks paying the largest amounts. The fourth quarter DIF balance is $92.7 billion up from $90.5 billion in the third quarter.

Insured Deposits rose to $7.151 trillion in the fourth quarter and is up 66.6% since the end of 2007 as savors seek the deposit insurance guarantee of $250,000 available at each bank in which a savor has insured deposits.

Reserves for Losses increased to $123.7 billion in the fourth quarter, which is still 21.7% above the level shown at the end of 2007. This is a sign of continued residual stress in the banking system.

FDIC data show that bank stocks are not a safe bet, and some big banks have negative weekly charts.

Bank Of America Failed To Hold Key Level On Thursday

Trading Strategy: Buy weakness to my semiannual value level of $23.68. My quarterly pivot is $24.40. Reduce holdings before earnings to lock in 25% of gains with the stock above my monthly pivot of $25.58.