The Federal Deposit Insurance Corporation released its Quarterly Banking Profile for the second quarter of 2017 last week without fanfare. Here’s what investors in bank stocks need to know!

FDIC Chairman Martin J. Gruenberg commented that the second quarter continued to show performance improvements, as the banking system continues to recover from the “Great Credit Crunch”. Profitability reached a post-crisis high as net income margins improved, but loan growth continued to slow for the third quarter in a row.

The FDIC Chair continues to be concerned that the banking system faces the challenges of a difficult interest-rate environment and a competitive lending environment. Some banks continue to “reach for yield” buying higher-risk assets with extended maturities. Interest-rate risk, liquidity risk and credit risk needs to be monitored and will remain a focus of supervisory attention.

Total Assets rose to $17.07 trillion in the second quarter, up 30.9% since the end of end of 2007. The four “too big to fail” money center banks, JP Morgan (JPM), Wells Fargo (WFC), Bank of America (BAC) and Citigroup (C) now hold 42% of all assets, which remains a regulatory headache. The lending scandals at Wells Fargo caused a decline of 1.1% of total assets to $1.76 trillion. 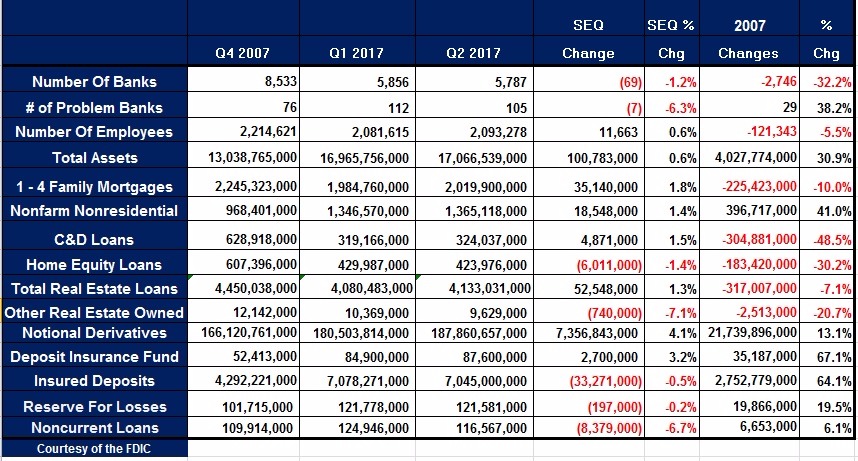 Residential Mortgages (1 to 4 family structures) represent the mortgage loans on the books of our nation’s banks. Production rose to $2.02 trillion in the second quarter, still 10% below the pace at the end of 2007. Mortgage lending thus lags its potential.

Nonfarm / Nonresidential Real Estate Loans represent lending to construction companies to build office buildings, strip malls, apartment buildings and condos, a major focus for community banks. This category of real estate lending expanded to a record $1.365 trillion, up 41% from the end of 2007. This is a potential problem as on-line shopping reduces traffic at America’s malls. There are 1,531 community and regional banks overexposed to CRE lending, including 513 publicly-traded banks. The FDIC seems to be ignoring the guidelines that banks should not have 300% or more of risk-based capital exposed to commercial real estate loans, which includes C&D loans.

Construction & Development Loans represent loans to community developers and homebuilders to finance planned communities. This was the Achilles Heel for community banks and the reason why more than 520 banks were seized by the FDIC bank failure process since the end of 2007. C&D loans were up 1.5% in the second quarter down from a growth rate of 1.5% in the first quarter. At $324 billion, C&D loans are still 48.5% below the level at end of 2007. There are 355 community banks overexposed to C&D lending, including 77 publicly-traded banks. The FDIC seems to be ignoring the guidelines that banks should not have 100% or more of risk-based capital exposed to risky community development loans.

Home Equity Loans represents second lien loans to homeowners who borrow against the equity of their homes. Regional banks typically offer HELOCs, but these loans continue to decline quarter over quarter, despite the dramatic rise in home prices. HELOC lending declined another 1.4% in the second quarter to $424 billion and is down 30.2% since the end of 2007. The Dodd-Frank law makes HELOC lending a paperwork nightmare.

Other Real Estate Owned declined a 7.1% in the second quarter to $9.63 billion as formerly foreclosed properties return to the market. This asset category peaked at $53.2 billion in the third quarter of 2010.

Notional Amount of Derivatives remains a financial stress among the seven largest banks. This exposure grew by 4.1% in the second quarter to $187.9 trillion. This exposure is up 13.1% since the end of 2007. It seems like the banking system may ignoring the Volcker Rule on proprietary trading.

Deposit Insurance Fund represents the dollars available to protect insured deposits. These monies are funded by all FDIC-insured institutions via annual assessments, with the largest banks paying the largest amounts. The second quarter sequential gain was 3.2% to $87.6 billion as the FDIC is well on its way to satisfy the regulatory guideline. By the end of September 2020 this fund is mandated to have the fund at 1.35% of insured deposits. The current level is unchanged at 1.24%, as the size of insured deposits rises.

Reserves for Losses dipped by 0.2% in the second quarter to $121.6 billion, but are still 19.5% above the level shown at the end of 2007, which is a sign of continued residual stress in the banking system.

Noncurrent Loans declined by a solid 6.7% in the second quarter to $116.6 billion still 6.1% above the level at the end of 2007. Much of this is legacy loans still in the banking system since the Great Recession.

The Federal Deposit Insurance Corporation released its Quarterly Banking Profile for the Fourth Quarter of 2017.

FDIC data show that bank stocks are not a safe bet, and some big banks have negative weekly charts.