Here’s what investors in bank stocks need to know!

FDIC Chairman Martin J. Gruenberg commented that the third quarter continued to show performance improvements in the banking system. However, what’s more important in my judgment are his continued cautions.

While higher yields improved net interest margins, some banks continue to reach for yield by investing in higher-risk and longer-term assets, which are subject to wider spreads versus the bank’s cost of money.

Competitive lending conditions and being in the ninth year of economic expansion has resulted in slowing loan growth in recent quarters. This slowdown is in all major loan categories and banks of all sizes. My focus is on real estate loans that fund mortgages, construction & development, commercial real estate and home equity loans.

Gruenberg indicates that “the industry must manage interest-rate risk, liquidity risk and credit risk carefully to continue to grow on a long-term, sustainable path. These challenges facing the industry will continue to be a focus of supervisory attention”.

Readers who know how I called the top for homebuilders in mid-2005, and the crash of the banks in mid-2006 should heed the guidelines I offer to investors today.

Remember the importance of the FDIC Quarterly Banking Profile. It’s the balance sheet of the U.S. economy. In my opinion, the banking system has not fully-recovered from the “Great Credit Crunch” which began ten years ago.

Third quarter FDIC data shows that Quarterly Net Income came in at $47.9 slipping slightly from $48.4 billion in the second quarter, and up 5.2% year over year. Community banks had a net income of $6 billion up 9.4% year over year.

While net operating income increased in the third quarter year over year, revenue from real estate lending did not! There was a small decline in income from the sale, securitization and servicing residential mortgages. And, there was a decline in trading income.

A loan category I have not covered in my analysis has been credit card debt. And this growth could become a concern as household debt rises to a new all-time high, as family income growth remains stagnant. In fact, banks are experiencing higher charge-offs for both credit card and auto debts.

The FDIC is also concerned about the lasting affects of hurricane assistance efforts. The FDIC is encouraging banks to help consumers when they can. Americans who lost their homes or automobiles may become delinquent on their loans. Some banks have offered six-month freezing on credit card accounts, and have eased regulations on some money market funds and bank CDs. The FDIC knows that it will take some time for the full effects of a natural disaster to subside, and they will monitor the current recovery process and say they will address the temporary needs of affected depository institutions and their customers.

The FDIC Quarterly Banking Profile For The Second Quarter Of 2017. 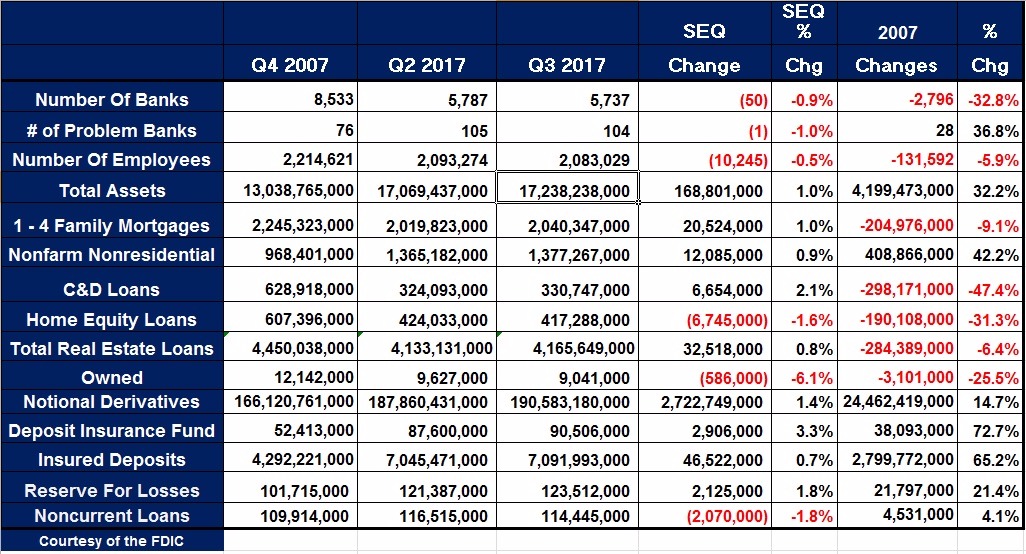 Residential Mortgages (1 to 4 family structures) represent the mortgage loans on the books of our nation’s banks. Production rose to $2.04 trillion in the third quarter, still 9.1% below the pace at the end of 2007. Mortgage lending thus lags its potential.

Nonfarm / Nonresidential Real Estate Loans represent lending to construction companies to build office buildings, strip malls, apartment buildings and condos, a major focus for community banks. This category of real estate lending expanded to a record $1.377 trillion, up 42.2% from the end of 2007. This is a potential problem as on-line shopping reduces traffic at America’s malls.

Construction & Development Loans represent loans to community developers and homebuilders to finance planned communities. This was the Achilles Heel for community banks and the reason why more than 500 banks were seized by the FDIC bank failure process since the end of 2007. C&D loans rose to $330.7 billion in the third quarter up 2.1% from the second quarter, but 47.4% below the level at the end of 2007.

Home Equity Loans represents second lien loans to homeowners who borrow against the equity of their homes. Regional banks typically offer HELOCs, but these loans continue to decline quarter over quarter, despite the dramatic rise in home prices. HELOC lending declined another 1.6% in the third quarter to $417.3 billion and is down 31.3% since the end of 2007. The Dodd-Frank law makes HELOC lending a paperwork nightmare.

Notional Amount of Derivatives remains a financial stress among the seven largest banks. This exposure grew by 1.4% in the third quarter to $190.58 trillion. This exposure is up 14.7% since the end of 2007. It seems like the banking system may be ignoring the Volcker Rule on proprietary trading.

Deposit Insurance Fund represents the dollars available to protect insured deposits. These monies are funded by all FDIC-insured institutions via annual assessments, with the largest banks paying the largest amounts. The third quarter sequential gain was 3.3% to $90.5 billion as the FDIC is well on its way to satisfy the regulatory guideline. By the end of September 2020 this fund is mandated to have the fund at 1.35% of insured deposits. The current level rose to 1.28% but the size of insured deposits continues to rise.

Insured Deposits rose to $7.091 trillion in the third quarter and is up 65.2% since the end of 2007 as savors seek the deposit insurance guarantee of $250,000 available at each bank in which a savor has insured deposits. A future financial obligation of the larger banks is to begin to fund any short fall in the DIF if the 1.35% ratio is not met by the end of 2018. This special assessment occurs in early 2019.

Reserves for Losses increased by 1.8% in the third quarter to $123.5 billion. This is 21.4% above the level at the end of 2007. This is a sign of continued residual stress in the banking system.

Noncurrent Loans declined by 1.6% in the third quarter to $114.4 billion still 4.1% above the level at the end of 2007. Much of this is legacy loans still in the banking system since the “Great Credit Crunch”.

The Federal Deposit Insurance Corporation released its Quarterly Banking Profile for the Fourth Quarter of 2017.

Bank Of America Failed To Hold Key Level On Thursday

Trading Strategy: Buy weakness to my semiannual value level of $23.68. My quarterly pivot is $24.40. Reduce holdings before earnings to lock in 25% of gains with the stock above my monthly pivot of $25.58.