Crude Oil Is Beginning 2018 With A Chart Breakout

Investors should beware that rising crude oil prices have been the driver of higher inflation since the early-1970’s when we experienced an oil embargo and those long lines at the gas stations. The price at the gas pump rose from like 35 cents a gallon to about $1.50.

Nymex crude oil is just one of several investment choices that include an energy exchange-traded fund, or specific stocks such as Chevron (CVX) and Exxon Mobil (XOM), or more speculative oil and gas exploration companies. 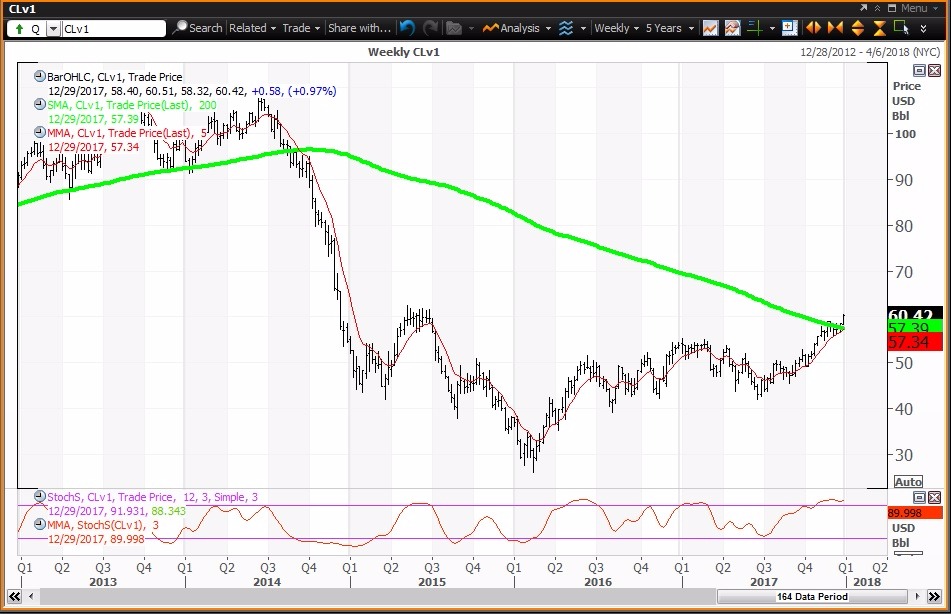 Given these charts and analysis, investors should buy weakness to my monthly value level of $56.67, and reduce holdings on strength to my annual and quarterly risky levels of $63.81 and $64.53, respectively.

As crude oil prices rise the price at the gas pump becomes a tax for Main Street USA. However, a higher price reopens fracking operations that have been closed as lower prices that some operations too expensive.

The 11 S&P Sector ETFs Have Had Flip-Flop Ratings

Only 2 of 11 S&P Sector ETFs Have Overweight Ratings

The REITs and consumer staples are the only two of 11 S&P sector ETFs that carry overweight ratings.

The consumer staples ETF has a positive weekly chart and thus has an overweight rating.

There are no safe havens in the stock market when all 11 S&P sector ETFs have negative weekly charts.

Consumer Staples and Utilities S&P Sector ETFs have been Upgraded

S&P Sector ETFs Downgraded As None Are Rated Overweight

The 11 S&P sector ETFs lack leadership as 9 of 11 have underweight ratings.

S&P Sector ETFs, 3 are Overweight, 4 are Equal-Weight, and 4 are Underweight

The 11 S&P sectors continue to be led by consumer discretionary, technology and health care.

S&P Sector ETFs; 6 are Overweight, 2 are Equal-Weight, 3 are Underweight

The 11 S&P sectors are led by consumer discretionary, technology and health care.