Economic Warnings From The Yield Curve

What does this mean for markets and the economy in 2018? A flattening yield curve warns that there could be a recession. Wall Street says ‘No’ to that notion as tax cuts take effect and as infrastructure spending begins. An infrastructure bill faces the hurdle of needed 60 ‘yea’ votes in the Senate to pass.

I caution that tax cuts for Main Street will be offset by higher healthcare costs and higher interest charges on rates adjusted higher as the prime rate rises with the federal funds rate. Rates on money market rates will lag, and rates on bank CD’s are locked until maturities.

Household debts are on the rise and should soon exceed $13 trillion, a new all-time high.

Here’s the weekly chart for the 2-Year U.S. Treasury Yield. 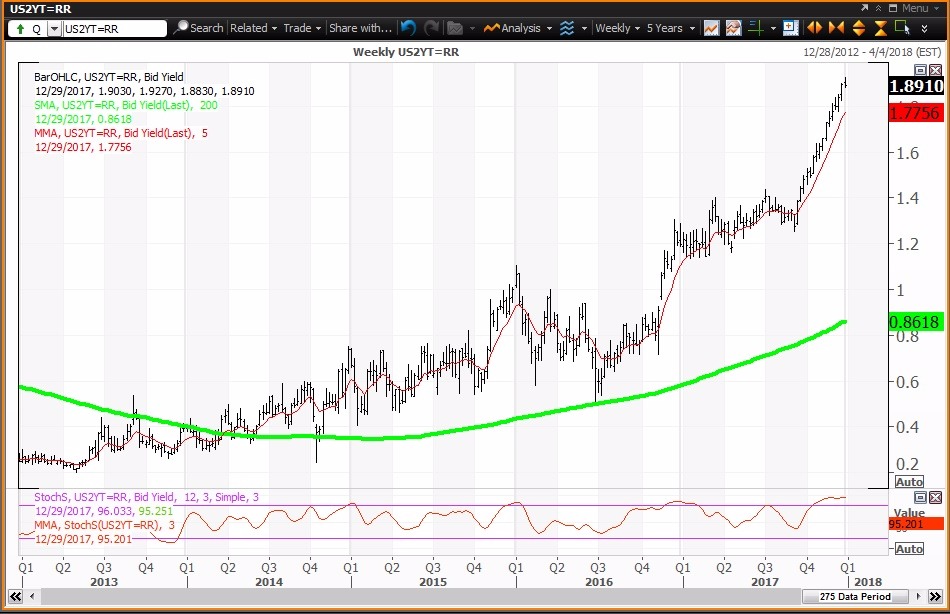 The 2-Year yield has been rising since holding its 200-week simple moving average or ‘reversion to the mean’ during the week of June 24, 2016 when this average was 0.50%. The weekly chart favors higher yields as the 2-Year yield is above its five-week
modified moving average of 1.776%. A multiyear high for this yield was set at 1.927% on Dec. 27. The 12x3x3 weekly slow stochastic ended 2017 at 95.20 indicating that the rise in this yield may have risen too far too fast. A reading above 80.00 indicates that the rise in yield may have been overdone.

If you are looking for a 2-Year bank CD don’t accept an offer below 2.00%. Any deposit of$250,000 or less will carry the FDIC guarantee that covers insured deposits. There are $7.09 trillion insured deposits in the banking system at the end of the third quarter 2017. 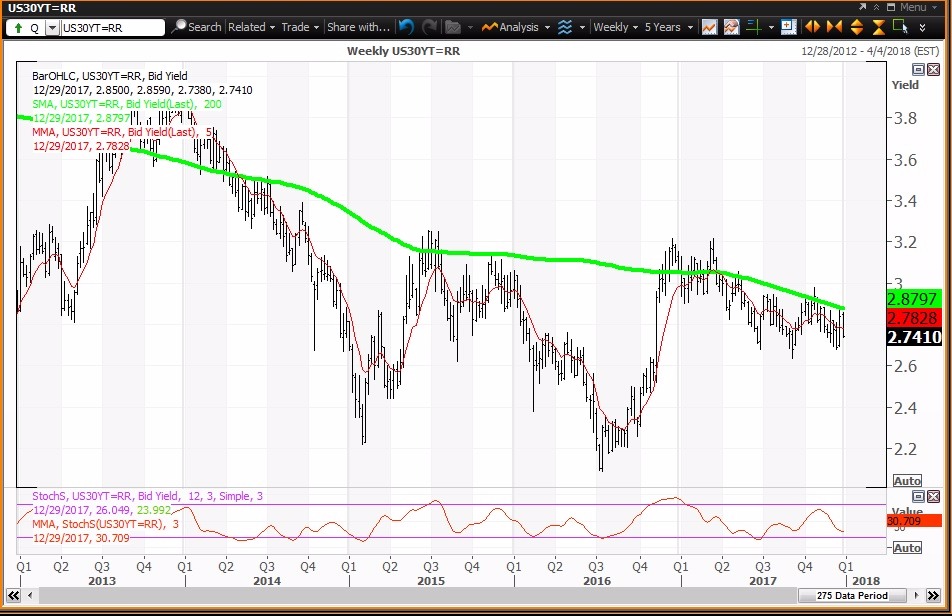 If you are looking for a 30-year fixed rate mortgage or refinancing plan, you should not settle for a mortgage rate above 4%. Many experts suggest a 15-year mortgage at a lower rate, but I suggest the 30-year as your monthly payments will be much lower.

The 11 S&P Sector ETFs Have Had Flip-Flop Ratings

Only 2 of 11 S&P Sector ETFs Have Overweight Ratings

The REITs and consumer staples are the only two of 11 S&P sector ETFs that carry overweight ratings.

The consumer staples ETF has a positive weekly chart and thus has an overweight rating.

There are no safe havens in the stock market when all 11 S&P sector ETFs have negative weekly charts.

Consumer Staples and Utilities S&P Sector ETFs have been Upgraded

S&P Sector ETFs Downgraded As None Are Rated Overweight

The 11 S&P sector ETFs lack leadership as 9 of 11 have underweight ratings.

S&P Sector ETFs, 3 are Overweight, 4 are Equal-Weight, and 4 are Underweight

The 11 S&P sectors continue to be led by consumer discretionary, technology and health care.

S&P Sector ETFs; 6 are Overweight, 2 are Equal-Weight, 3 are Underweight

The 11 S&P sectors are led by consumer discretionary, technology and health care.