I approve of anything that demands respect for its space by the deployment of a violently vivid shade of pink.

July in Tennessee is a sauna with no exit, a long month of blistering sun and pressing humidity.

Sleep is fragmented by the desultory crackle of fireworks and panic of dogs; relief from the heat arrives in the form of violent thunderstorms (which also frighten the dogs). Indoors is artificially chilled, but stifling after a week or so.

Every July is taxing, but 2017 weighs especially heavy on the psyche.

Each bit of breaking news concerning our political “leaders” is rife with fresh indignity. Dread is unrelenting. The heat, so unpleasant in the present, burns with portent of a future wrought from past and current negligence.

I’m fascinated with the flowers of July. Having bloomed in late June, most of the blossoms in my garden are now wilting into a state of luxuriant decay, sopping with rain that never quite dries in the sweltering air. They’re bright, beautiful, and just the tiniest bit repulsive; they’re alien and tentaculoid.

Knockout roses are popular in my neighborhood, surrounding mailbox posts like the impossibly thorny briar Maleficent set in place to surround Sleeping Beauty. Above their vicious stems, they bloom in a bright magenta that dazzles the eye, a too-saturated pink that confuses a cell phone camera lens.

I don’t have any roses in my own garden and most often see them while driving—aggressive, blurred bursts of color set against green shrubbery. I’m fond of these flowers throughout each stage of their blooming cycle. They seem to me so defiant, a warding rather than welcoming type of blossom, and I as a matter approve of anything that demands respect for its space by the deployment of a violently vivid shade of pink. 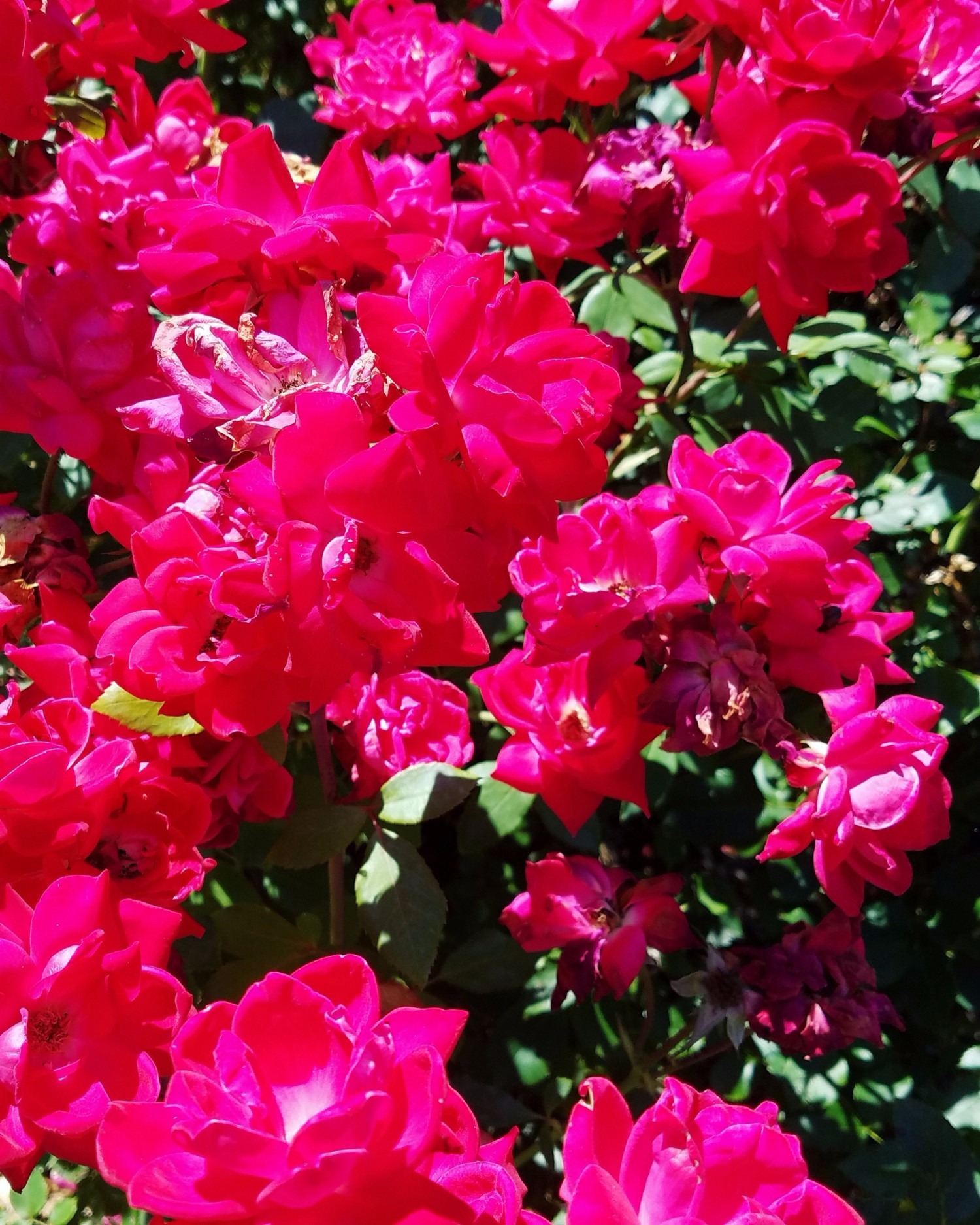 These flowers are defiant, a warding rather than welcoming type of blossom.

To imitate knockout roses via makeup, I initially intended to focus purely on the color and apply a fairly traditional look to eyes and lips, rendered in hot pink, but once I got some pigment on a brush and started dabbing it on my eyelids I just…didn’t stop. Pink. Pink. More pink. Roundish blotches of pink until I made something potentially lovely appear rather ghoulish; then it felt right. I globbed eye gloss on top haphazardly to give the blobs of color texture—“shiny” and “glowy” can read quite similarly in the right light.

Urban Decay eyeshadow in “Savage” is my preferred shade of cosmetic pink, paired with NYX Cosmic Metals Lip Cream in “Fuschia Fusion.” To recreate the look less alarmingly, I’d apply a bit more sparingly. I also learned in creating this face that eye gloss is apt to cause the shadow it covers to stain skin: plan accordingly.

This face is exactly how I feel about the month of July: 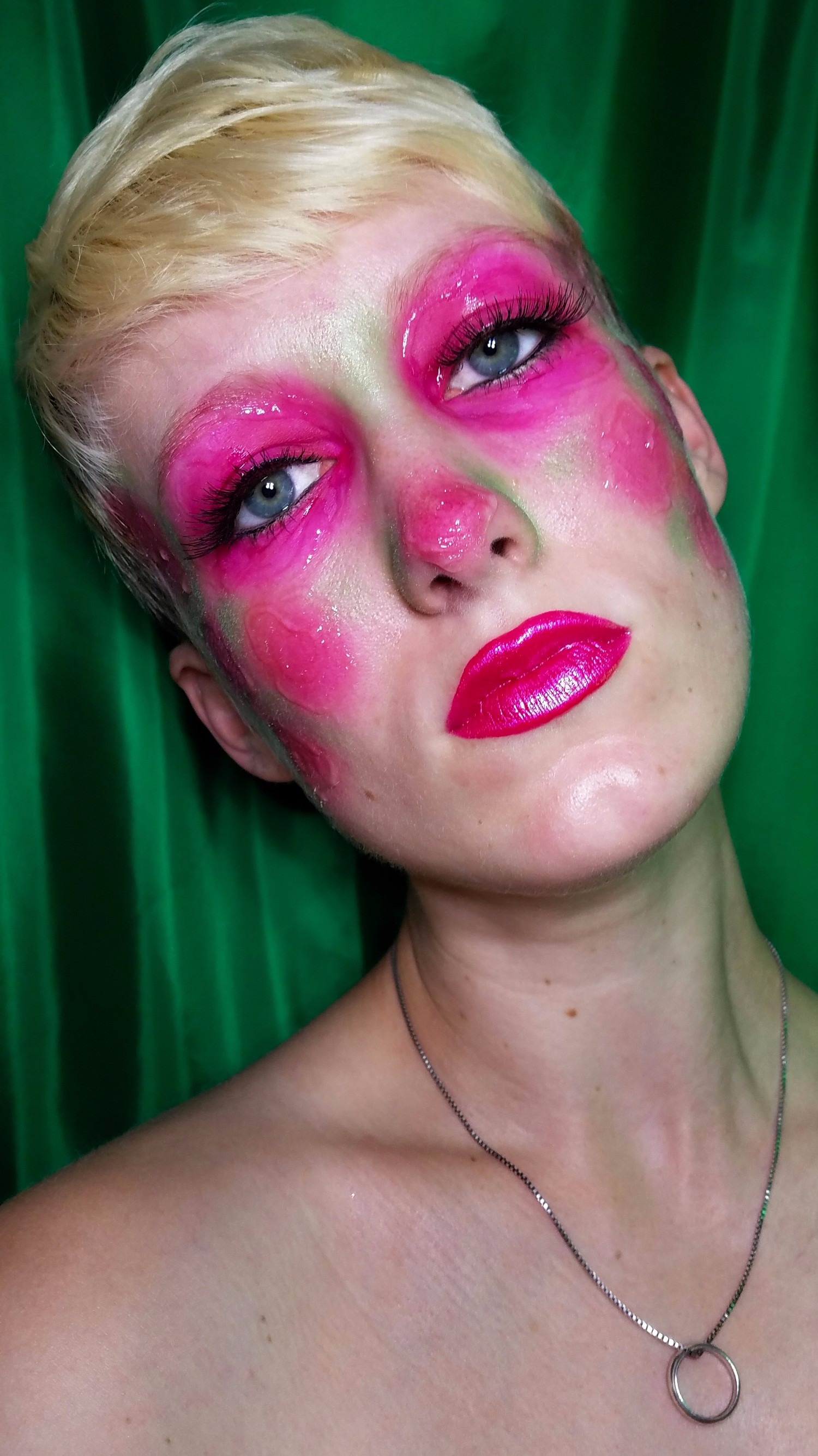 Bad Advice On Counting Up Sexual Partners And Pining For Panties