By David Berry, LAS VEGAS: The weigh-in for major fights has become an event unto itself in recent years. That was as true as ever at today's Canelo Alvarez (49-1-1, 34KO) vs. Gennady Golovkin (37-0, 33KO) official weigh-in for their middleweight title tilt tomorrow night, September 16, on HBO PPV. The MGM Grand Garden Arena, which hosted the weigh-in, but will not host the main event, was filled to capacity with raving fans, though it was evident from the start that it was a largely pro-Canelo crowd.

The Ring Magazine, WBC, WBA, IBF an IBO middleweight titles are all on the line (though, if Canelo wins, the WBC belt will remain vacant, as he has refused to engage with the popular sanctioning body).

On the scales for the televised undercard: 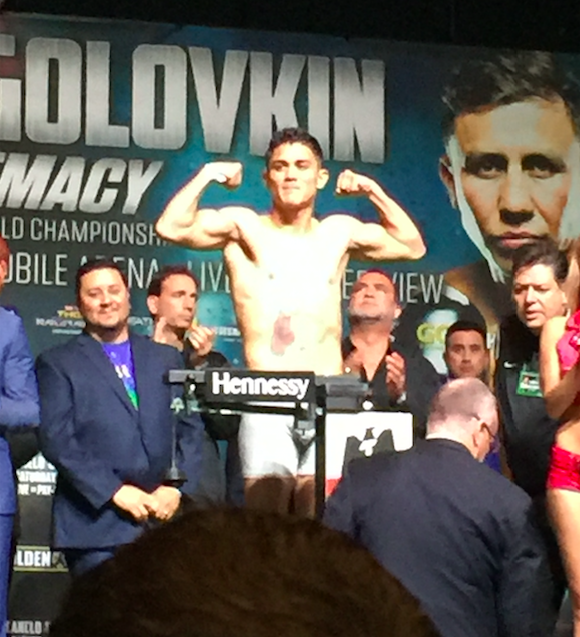 Joseph "JoJo" Diaz Jr. (24-0, 13KO) and late-replacement opponent Rafael Rivera (25-0-2, 16KO) both hit the scales for their WBC Featherweight Title eliminator. Diaz Jr. came in at the division limit of 126, but Rivera will have an hour to lose one pound, as he came in at 127 pounds.

Randy Caballero (24-0, 14KO) and Diego De la Hoya (19-0, 9KO) hit the scales for their NABF and vacant NABO Super Bantamweight title fight, a 10 rounder, and both made weight. In a battle of undefeated fighters, Caballero weighed 121 pounds and De la Hoya weighed 122 pounds. 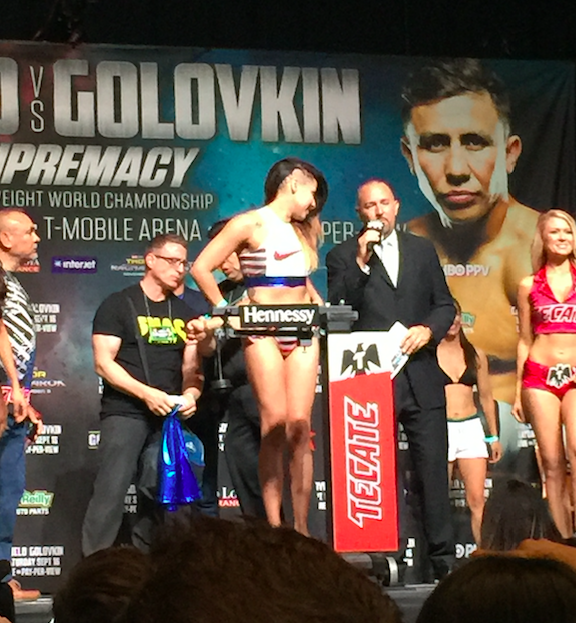 Men's super lightweight 6 rounder. Cesar Valenzuela (7-1, 2KO) weighed the division limit of 140. Vergil Ortiz (6-0, 6KO) from Dallas, TX, a rising, power-hitting prospect, hit the scales at a shredded 140.5. He was one-half pound over the limit, so he shed his drawers and stood behind a towel to make weight, which he did - an even 140.