When it comes to the AECO and Station 2 pricing in Alberta and British Columbia respectively, the third quarter of 2017 was an unexpectedly ugly quarter for the Canadian natural gas producers.

TransCanada Corp. (TRP) operates the NOVA Gas Transmission Ltd. (NGTL) System, the largest and most far-reaching network of natural gas pipelines in Alberta that is also the sole outlet for many producers to transport their gas to markets within the Province. And in Q3 2017, TransCanada was working to maintain and expand the NGTL system capacity in Alberta and British Columbia. Specifically, the 2017 NGTL Expansion Project consists of five separate pipeline loops and two compression stations and the current status of each section is below:

This project is part of the ongoing C$5.1 billion near-term capital program for the NGTL System further enhancing TransCanada's ability to meet the needs of its customers for safe, reliable and competitive gas transmission infrastructure, led to service reductions pushing AECO prices at extremely low prices (under C$1/GJ) during the third quarter and in October 2017, as illustrated below: 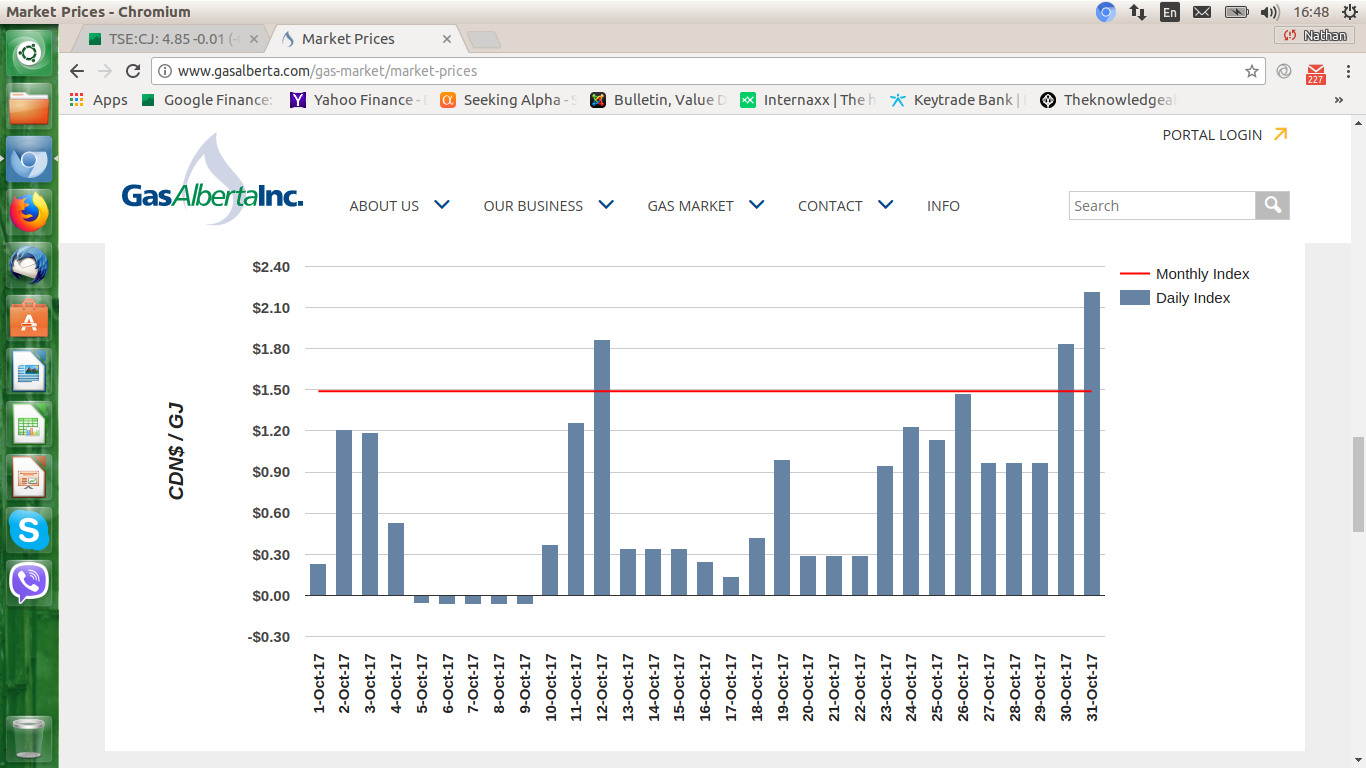 Actually, according to the chart above, natural gas price at Alberta’s AECO pricing hub dropped to negative 15 cents per GJ on some days last October. And negative AECO pricing isn't an everyday thing. Actually, AECO price has never been in negative territory over the last 20 years.

As a result, many natural gas producers have had to shut in production at some of their wells in response to unprecedented drop in gas prices at AECO and Station 2 hubs to avoid selling their molecules for virtually nothing in the spot market.

Curently, the 2017 NGTL Expansion Project is almost complete and most sections of the project have already been in-service as mentioned above, which has helped alleviate the pricing issues in the AECO market. As such, the AECO price has returned above C$2/GJ since Nov. 1, as illustrated below: 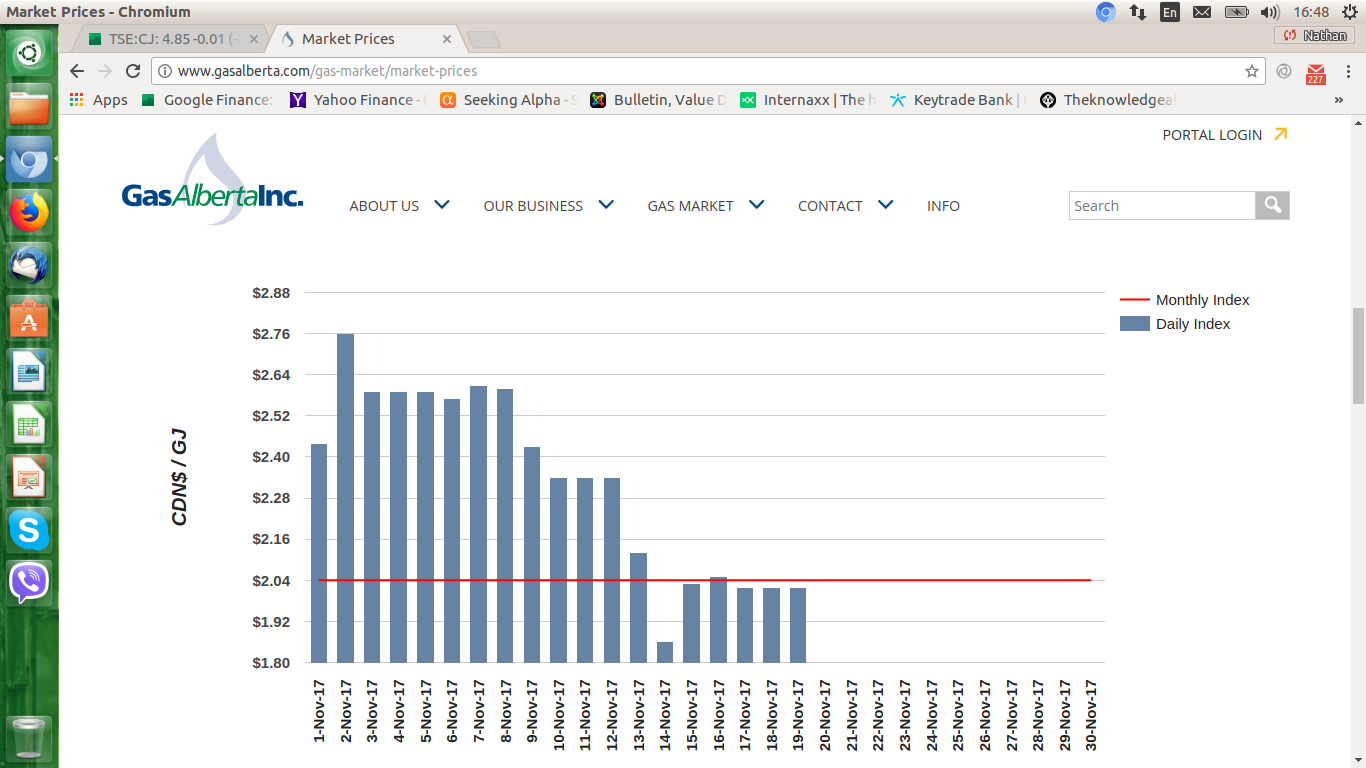 And the good news is set to continue for the natural gas producers in Alberta.

And last September, the National Energy Board approved the new toll agreement between TRP and the Canadian Association of Petroleum Producers. As a result, shippers under the deal will transport 1.5 Bcf/d to the Dawn hub in Ontario, based on a single toll rate of $0.77/GJ. Actually, the deal grants a 46% discount for 10 years, down to C$0.77/GJ (65 cents/MMBtu) to 23 producers that bought shipping contracts for 1.4 Bcf/d.

Thanks also to this development, Ontario becomes the centre of a battle between Western Canadian producers and Appalachian producers, given that the competing Rover Pipeline by Energy Transfer Partners LP (ETP) will be in full service in the first half of 2018 delivering gas to Ontario from Pennsylvania. However, it must be noted that the majority of the Rover Pipeline will be utilized by customers on the U.S. segments of the pipeline, and only the volume not consumed in the U.S. will be transported to the Union Gas Hub in Canada, where it will be traded on the open market for consumption either back in the United States or to customers in Canada.

And what about the Station 2 price? Well, the Station 2 price hasn't yet returned to normalcy but still hovers under C$2/GJ because there is one more thing underpinning Stn 2 daily prices lagging AECO. Another pipeline network, the T- South system in British Columbia is still below full capacity. The original forecast chart had capacity coming up to full on Nov. 6th, but it slipped to the 8th.

The T-South system belongs to Westcoast Energy, a company owned by Spectra Energy (SE) that was acquired by Enbridge (ENB) in late 2016. Westcoast Energy announced three pipeline expansion proposal projects (Jackfish, High Pine and Wyndwood) in 2016 with completion date in late 2017, as shown here. And you can find more information about these projects along with the map here.

Therefore, the key reason why the Station 2 pricing remains weak is that Westcoast Energy has completed only the first half of the High Pine Expansion thus far, so the 240 mmcfd expansion has been completed on the Fort Nelson Mainline to Stn 2, but the matching capacity to Sunset and off on TCPL will not be ready before year end. This means that Painted Pony (PONY.T, PDPYF) can flow the incremental 240 mmcfd to Stn 2 but no further, which is currently impacting the market and Station 2 daily prices.

However, after talking with many industry participants, I draw the conclusion that Stn 2 will return to normal supply and demand-based pricing by early 2018 upon completion of the matching capacity to Sunset and off on TCPL. Historically, the Station 2 price was always around Sumas less transportation costs of approximately C$0.50/mcf.

Disclosure: I have no positions in any stocks mentioned, and no plans to initiate any positions within the next 72 hours. I wrote this article myself, and it expresses my own opinions. I am not receiving compensation for it. I have no business relationship with any company whose stock is mentioned in this article.

Good catch, LAlberti. Thank you for the comment. TRP's project will significantly improve the nat gas price in Station 2 by the end of 2018 narrowing the current gap with AECO.

"Some gas from Western Canada has already moved to the LNG export market on the Gulf Coast, although not on the TransCanada system, but I think we can compete with any other system out there so if our producers want to do that, we can provide that for them.” "...we can actually move a unit of northeast B.C. gas into Mexico City once we get Sur de Texas fully built out which should be about a year from now.”

TransCanada makes proposals to Montney producers to transport their gas from British Columbia to the Gulf of Mexico.