As mentioned in one of our recent free articles here, there is currently a significant gap between AECO and Station 2 prices because of the fact that Westcoast Energy's pipeline project in British Columbia has not yet been completed. However, I have talked with three industry participants thus far who told me that Westcoast Energy's High Pine expansion will most likely be completed by year end. And also, they project that the completion of this project will significantly narrow the current gap between AECO and Station 2 prices effective Q1 2018. This project is illustrated below: 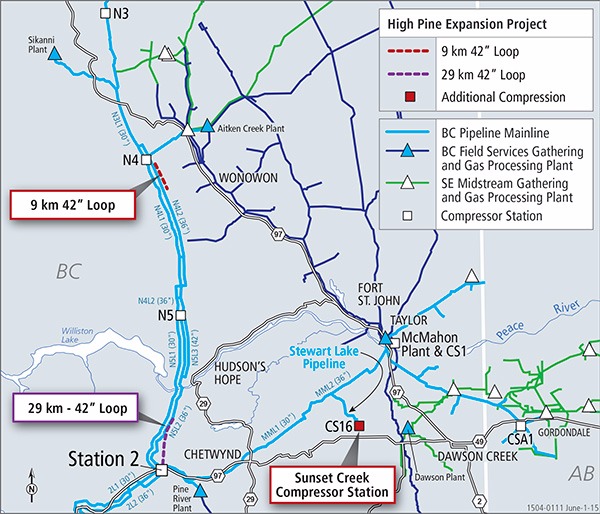 Furthermore, according to this article here that was published last week, TransCanada (TRP) is making proposals to Montney producers to transport their gas from North East B.C. all the way to the U.S. Gulf of Mexico targeting the LNG terminals and the LNG export market.

TRP has been looking for new growth opportunities and according to Karl Johansson, executive vice-president for Canada and Mexico natural gas:

"In a year, TransCanada will be able to transport Canadian gas all the way to Mexico. Tariffs would be competitive with options already in use by Western Canadian natural gas producers reaching the Gulf Coast LNG market".

Karl Johansson also said during the company’s investor day in late November 2017 that:

“We are hopeful that (Western Canadian producers can find their) own market out the West Coast, but if (they) can’t, we can actually still access LNG for our producers. For that matter, we can actually move a unit of northeast B.C. gas into Mexico City once we get Sur de Texas fully built out which should be about a year from now.”

On that front, we read between the lines and believe that TransCanada will implement the successful policy already used with its Long Term Fixed Price (LTFP) service on the Mainline that took effect Nov. 1, 2017 and cleared a lot of the surplus gas “which has been nagging us on the Mainline for years,” according to Karl Johannson. Thanks to this key development on the Mainline, TRP takes 4 Bcf/d out of Alberta's natural gas market and transports these volumes to the Dawn hub in Ontario.

After all, the main beneficiaries are those natural gas producers in British Columbia who have natural gas production with no firm contractual commitments in Q4 2018 when TRP's LNG export plan materializes. In other words, the potential shippers and main beneficiaries are these companies which have already staked out significant positions in British Columbia investing in the prolific Montney play such as Chinook Energy (CKE.T), Crew Energy (CR.T), Painted Pony (PONY.T), Kelt Exploration (KEL.T), Storm Resources (SRX.T), Arc Resources (ARX.T) along with privately-held Progress Energy (now Petronas' subsidiary), Canbriam Energy, Black Swan Energy and Saguaro Resources.

Furthermore, to a lesser extent, Tourmaline Oil (TOU.T) and Canadian Natural Resources (CNQ.T) could also benefit from TRP's LNG export plan given that both firms have producing properties in British Columbia and therefore part of their natural gas production in B.C. will likely have no firm contractual commitments in Q4 2018.