The morning after comedian John Oliver, host of HBO’s “Last Week Tonight,” delivered a 22-minute rant about the Miss America Pageant’s highly inflated claim of being “America’s leading provider of academic scholarships for women,” Troy Eller English, SWE archivist, received an urgent email from headquarters. Oliver had concluded his Sept. 21, 2014, segment by calling on viewers to support the scholarship funds of SWE and other worthy women’s organizations. He even had posted SWE’s web address on screen, and now, inquiries were flooding in.

As SWE raced to update its online scholarship donor page and Facebook presence to capitalize on Oliver’s shout-out, leadership wanted to make sure everyone got their facts right. “Do you have any idea of how much money, in scholarships, SWE has given out since 1950?” the email asked.

“I’ll look through the annual reports and audits to update the amount awarded since 2004,” she added. “SWE offers far more scholarships [now] than it did a decade ago, so that number should jump significantly.”

Over the next 30 days, “Last Week Tonight” viewers would donate more than $75,000 to SWE’s scholarship fund. Their gifts “increased annual donations by 10 to 15 percent and easily represented 20 percent of the individual donations SWE received in 2014,” said Honna Eichler George, SWE manager of fund development. “Fifty to 60 of them became monthly donors from that point on,” she added, noting that they represented a previously untapped resource: people with no prior ties to SWE.

The Oliver scholarship opportunity is one of many examples that demonstrate how organizational history is a powerful asset in the hands of a skilled archivist. From frequent collaborations with SWE Magazine (Eller English contributes a “Scrapbook” column to each issue), to social media postings, history panels at the annual WE conferences, where she also conducts oral histories, and supporting both marketing and development efforts, Eller English’s work with the archives is an integral part of the Society’s success. Equally important, she assists outside researchers, further explores the archives, fills in gaps, develops new content, and helps SWE sections set up archives of their own.

BRINGING HISTORY INTO THE PRESENT 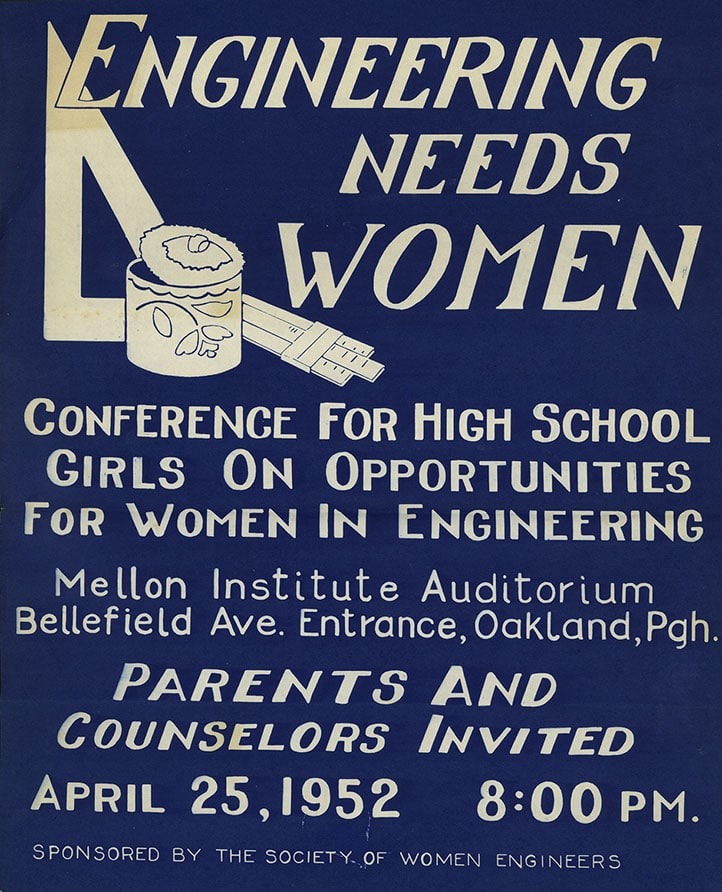 The 1952 poster, above, is among Eller English’s favorite items in the collection. “I like the juxtaposition of the slide rule and face powder jar – it very much reflects the narrow line SWE walked in presenting its image to the world in the 1950s,” she said.

SWE management has continually called on Eller English to identify and retrieve a wealth of archival materials. “As we’ve expanded our marketing and public relations efforts … as we have stories, as we get press inquiries, being able to quickly answer questions about our history has been invaluable,” Karen Horting, CAE, SWE executive director and CEO, said.

Horting cited an example from a recent news item. “We received a large donation from Jack Black, the comedian,” she said. “It’s in honor of his mother, who passed last year. She was a member of SWE. When he first contacted us, my development person went to Troy and said, ‘What do you have on Judith Black Cohen?’ And she pulled all this great stuff from when she was active in the Los Angeles Section, in the ’70s and ’80s. So, it’s great to be able, within hours, to have that kind of information!”

SWE’s director of editorial and publications, Anne Perusek, notes the dramatic difference between having a “working” archives with a dedicated archivist, and attempting to communicate the Society’s history on the basis of stray records and past publications. The Society’s reliance on the volunteer-based archives committee had ensured that key documents and stories were preserved, but as volunteers, they were not trained in archival processes nor did they have time and appropriate facilities to sort the collection.

“I think we owe a debt to the archives committee for laying the groundwork. Then, as the collection was processed, it became possible to really tell SWE’s story in an impactful, exciting way,” she said. “I’ve enjoyed the many projects Troy and I have collaborated on. It’s been very satisfying.”