A Virginia teen blogs on the importance of comprehensive sex ed and the culture of consent. By Lauren Richards

Growing up as a teenager in Arlington, Virginia (a suburb five minutes outside of Washington, D.C.), I was exposed to both ends of the cultural spectrum. In D.C., and in most areas in northern Virginia, the majority of people are socially and politically liberal. But just several miles south, it is a whole other world of rural conservatism; which made it a very interesting place to grow up and to be educated about sex and sexuality.

In my opinion, sex education in the Arlington Public School system is exceptional. It began in middle school with basic anatomy classes and age-appropriate education about sexually transmitted infections (STIs). An anonymous “question and answer day” gave us the opportunity to ask our teachers any questions we had about sex, STIs, contraceptives and relationships. If it hadn’t been anonymous, we might not have asked them, for fear of feeling embarrassed.

The idea of healthy relationships was introduced to the mix in our high school sex education course. Hearing how one teenager in the United States acquires HIV every hour, I realize how lucky I am to have received this valuable information. 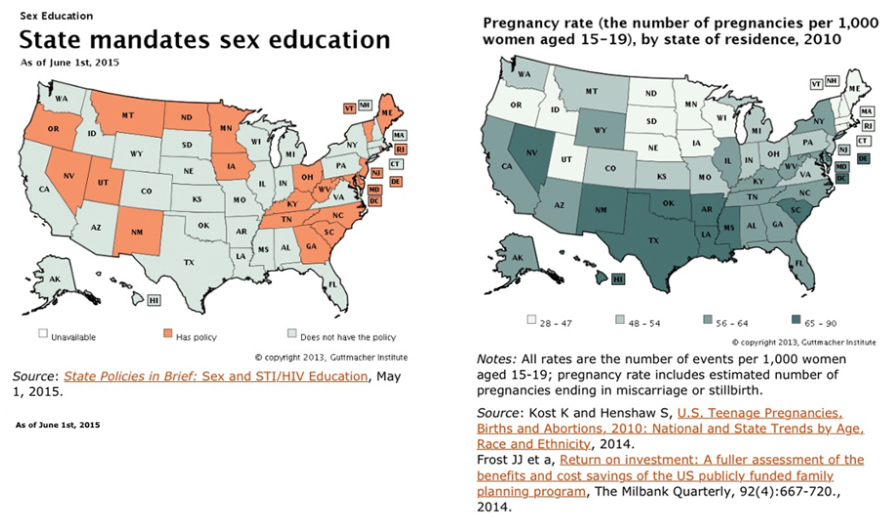 I remember going to school dances with a girl from a middle school in the same general geographic region as mine. She was popular and beautiful; I did not know her well. Years later, while I was going through my Facebook feed, she popped up on my screen. She had moved to Florida, had a boyfriend—and was a few months pregnant at 16-years-old.

I couldn’t believe it! Someone I actually had been in the same room with in middle school and shared similar social groups with was actually going to have a baby. And she did. More recently, I discovered she became pregnant with another, only a few months after she gave birth to her first.

Although this was shocking to me, it is a normal occurrence in some areas of the United States. The teen birth rate has been decreasing continuously since its peak in the 1990s, but the U.S. is still the home of one of the highest teen birth rates of any fully industrialized country. This is directly due to the lack of quality, comprehensive sex education in many U.S. public schools.

Of our nation’s 50 states, only 20 require sex and HIV education and only 19 of them mandate that the information taught to kids about sexual intercourse, STIs and HIV/AIDS be medically accurate. The fact that there are 31 states without this provision is concerning to say the least. Not surprisingly, the rates of pregnancy and HIV infection are high in these states. The data are definitive: young people who do not receive complete and comprehensive information on sex and related health topics are more likely to be younger when they first have sex. They also face an increased likelihood of pregnancy (including unplanned) and/or acquiring an STI.

In states where sex education isn’t required, most opt for an “abstinence only” sex ed curriculum, which teaches children and young adults to avoid having sex until marriage, without discussing various contraceptives, how they work, and their benefits. There have been multiple studies that indicate that an “abstinence only” approach to sex ed does not succeed at delaying the onset of sexual activity. In fact, it can accelerate it. And, because abstinence-only sex ed equates abstinence from vaginal intercourse with chastity, many children who are taught abstinence-only sex ed engage in oral and anal sex instead. Because the kids are not taught about prevention or condoms, they can be at higher risk for contracting STIs.

Another disturbing trend is the lack of a culture of consent. Almost nowhere in any sex ed curriculum is the idea of a healthy, consensual relationship addressed. Frequently, in the news, we see examples of a breach of consent between two people—rape—and the resulting physical/mental health issues. It’s very apparent that America’s youth need to be taught the basics of a healthy, relationship with the core idea being that consent is the first step to any healthy relationship.

We’re taught since childhood to “keep our hands to ourselves.” This lesson about a fundamental expression of respect for others should eventually lead to other deeper conversations between parents and children about how, when we finally are invited to not keep our hands to ourselves, that we do it respectfully. Many parents may feel their children don’t need to hear such notions or they feel too uncomfortable themselves to bring it up. But parents should realize it is important to discuss the idea of consent. Both boys and girls must learn about consent and why it’s necessary. Consent is the idea of respecting someone, their wishes, and their bodies all at once. It’s so important to our lives, and we see the harmful effects that can come from a violation of this right of autonomy of one’s body. Sharing this knowledge with both boys and girls is essential if we are ever to realize true gender equality.

My experience with sex ed is not the norm, but it needs to be. This basic subject should be a part of every child’s educational foundation. Children have a right to understand their bodies and how to safely navigate relationships in order to give them the chance to protect their health and happiness. Without complete and accurate information, they aren’t prepared as they should be.

Richards’ views are her own and do not necessarily express the views of Together for Girls’ partners.

Inspired by Elizabeth Warren’s refusal to be silenced in the Senate, Chelsea Clinton is writing a children’s book titled, SHE PERSISTED. The picture book celebrates thirteen American women “who never took no for an answer.”

‘Rise’ For Women’s Equality: A National Minute Of Silence Planned For January 21, 2017

From Hawaii to Maine, Alaska to Florida, and every great state in between, for one shared silent minute, we rise for our mothers, our sisters, our daughters, and ourselves.

Tanzania’s President Magufuli is facing widespread criticism following comments he made about how girls who become pregnant are banned from returning to school.