We've Been Here Before...And It Ended With An Epic Crash

Wolf Richter just published some charts that, for anyone with a sense of stock market history, are pretty ominous. It seems that the major market indexes that recently soared back to record highs are being elevated by an amazingly small number of stocks – Apple, Microsoft, Amazon, Google and Facebook to be specific — which he calls the “Giant 5.” These stocks now account for nearly one-fifth of the Wilshire 5000 stock index’s value: 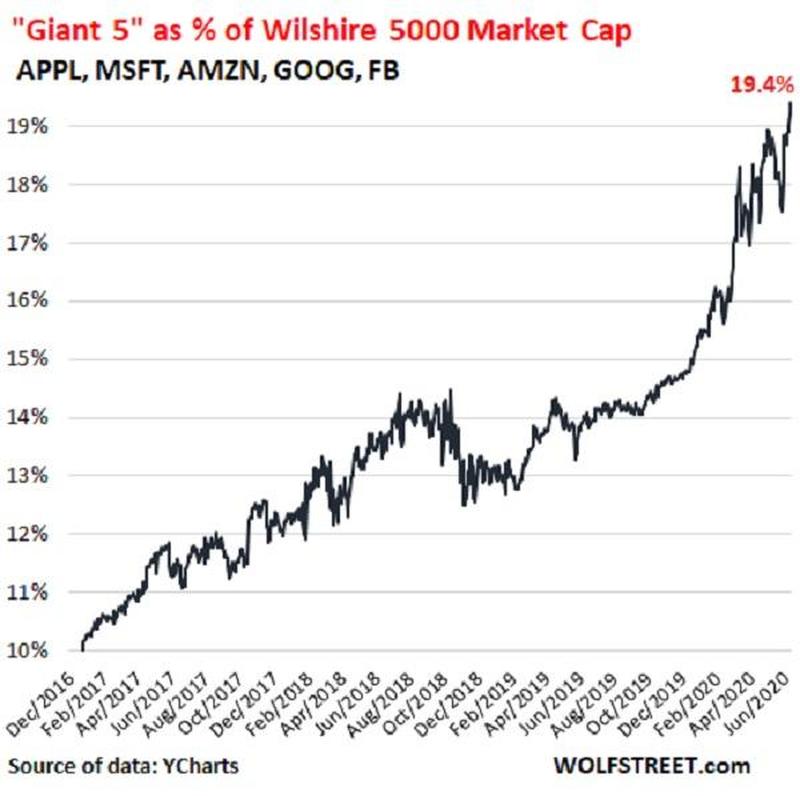 In the 1960s and early 1970s the US stock market was dominated by a group of large-cap stocks that took on a life of their own, elevating the market far beyond what it would have been without them. See if this Investopedia entry sounds familiar:

The Nifty 50 refers to the fifty most popular large-cap stocks that traded at high valuations in the 1960s and 1970s. They included household names such as Xerox (XRX), IBM, Polaroid and Coca-Cola (KO). Due to their proven growth records and continual increases in dividends, the Nifty Fifty were viewed as “one-decision” picks: investors were told to buy and never sell.

Many Nifty 50 stocks sported price-to-earnings (P/E) ratios as high as 100 times earnings. They propelled the bull market of the early 1970s, only to come crashing down in the 1973-74 bear market.

Then in the 1990s, a group of Big Tech stocks strikingly similar to today’s Giant 5 so dominated the market that they gained global significance:

Volcker saw the bubble. Greenspan missed it. Just a few weeks after Volcker’s speech, Greenspan testified before Congress, saying “Bubbles generally are perceptible only after the fact. To spot a bubble in advance requires a judgment that hundreds of thousands of informed investors have it all wrong. Betting against markets is usually precarious at best.” But the so-called “informed investors” were acting in response to Greenspan’s policy of lowering rates to help the financial markets.

In 2000, inevitably, the bubble popped. Minutes of FOMC meetings show that Greenspan was blind to the fact that the market had been racing up precisely because of his reckless monetary policy. The market crash ruined many naive speculators. Meanwhile, economic researchers began to take issue with Greenspan’s beloved productivity growth. One found that productivity had actually decreased during the late 1990s.

Here’s what happened to the Nasdaq index when that generation of Big Tech stocks returned to their intrinsic value in 2000:

One would have to search long and hard to find an asset that was down in the first quarter; one can thank the world's central banks for that - in Q1 is when the world's money printers finally threw in the towel on the brief if painful attempt to normalize global interest rates, strongly hinting that the next move will be rate cuts.